The Freedom Trail may not be in my backyard, but it is certainly in someone’s backyard. I lived in the Boston area for a few years so I’ve happened across it several times. My family was in Boston for the weekend to attend a 3-day music festival (an awesome 12th birthday present for my oldest son) and decided to hike the entire Freedom Trail the morning before Sunday’s performances began.

We decided to head SOBO on the trail even though it is traditionally walked NOBO as the southern terminus was at Boston Common, which was just a few blocks from City Hall Plaza, where the concert was held. We took the red line to Park Street and then hopped onto the orange line to ride it to North Station. It was just a short walk across the Charlestown Bridge to City Square Park where we started our hike. We started toward the USS Constitution, or Old Ironsides, the oldest commissioned warship in the world. We did the self-guided tour after going through security. Old Ironsides won battles in the Quasi War with France, the Barbary War and the War of 1812, earning her nickname due to her resilience.

After the USS Constitution we crossed under the Tobin Bridge to a quaint part of Charlestown and headed uphill to Bunker Hill. We went into the Bunker Hill Museum across the street from the monument and got free passes to climb the monument. We climbed up the hill to where either Israel Putnam or William Prescott famously said “Don’t fire until you see the whites of their eyes.” The 1775 battle was a loss for the newly formed colonial army against the British, though they pushed back the British two times and ended up with half the casualties. It was the point where both the colonists and the British realized that the rebellion was serious.

The monument was 212′ tall and had 294 steps that led up a cramped spiraling staircase to a small observation room that overlooked Boston and the harbor. In the middle of the room was a shaft that aided in air circulation. It was pretty cool to stand on the grate over the shaft and look 200 feet down to the foundation of the monument.

By that time I had already fallen in love with my brand new shoes, Brooks Cascadia 8s. It’s not every shoe that you can wear for the first time while walking around a city for 6 hours and then stand at a concert for another 5 hours and still come away with comfortable feet. It wasn’t until later that I realized their traction on wet surfaces was terrible.

After exiting the Bunker Hill monument we found the official endpoint of the Freedom Trail and took a photo of standing around it.

End of the Freedom Trail

We made our way out of Charlestown and back across the Charlestown Bridge to Copp’s Hill Burying Ground. Copp’s Hill was in Boston’s North End and was Boston’s largest colonial burying ground.

From Copp’s Hill we made our way down the street to the Old North Church. It was at this church that in 1775 Robert Newman and Captain John Pullman held two lanterns in the steeple to warn that the British were moving to Lexington and Concord via the sea, not over land, and kicked off the American Revolution.

We walked through Boston’s North End until we came to the Paul Revere house. The house was, of course, Paul Revere’s and is today the oldest standing structure in Boston. We paid the small fee in order to take a self-guided tour through four of the house’s rooms. 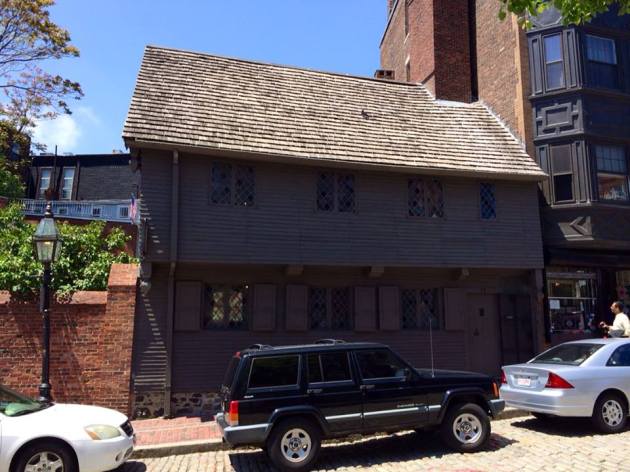 Before leaving Boston’s North End we grabbed some lunch at an Irish pub and some cannolis at Mike’s Pastry. All morning we saw people carrying white boxes with blue letters tied closed with string. As the density of boxes per person increased we knew we were near their source. The line was crazy long but my wife stood patiently in it to see what the hype was all about. We carried the box for the rest of the hike so they could be enjoyed at the end.

We crossed Atlantic Avenue and as we passed Haymarket we saw some bronze art in the crosswalks. This was the result of a 1976 project by Mags Harries called Asaroton, which was named after a Greek floor mosaic which created the illusion of trash on the floor. The art was reminiscent of the daily clutter on the ground after the closing of the outdoor market. After being removed for the Big Dig and re-installed in 2006 it was updated with modern debris.

We made our way into Government Center and passed by Faneuil Hall which was a meeting hall where many revolutionaries, like Samuel Adams, spoke. On the hall’s weathervane was a grasshopper. It was said that questioning what was on the Faneuil Hall weathervane was a way to tell whether or not the person was a spy during the War of 1812.

Down the street from Faneuil Hall was the Old State House, which was the political center for Boston. The Declaration of Independence was first publicly read in Massachusetts from its balcony.

Right below the Old State House balcony was the site of the Boston Massacre. At that site in 1770 five colonists were killed by British regulars; a display that the tensions between the colonists and British were beginning to culminate to a boiling point.

Site of the Boston Massacre

The density of historical sites grew as we approached the ending at Boston Commons. We stopped at the Old South Meeting House so my wife could take the self-guided tour (I was enjoying a coffee outside, which couldn’t go into the museum). The Old South Meeting House was a key location for speeches and protests leading up to the Revolutionary War. It was at that site which the Boston Massacre and the tea tax were protested.

Just up the street from the Old Corner Bookstore was the site of the first public school in the nation, Boston Latin School, dating back to 1635. Many people of note attended the school including Benjamin Franklin, Samuel Adams and John Hancock. Today there is an interesting mosaic in the sidewalk in the shape of a hopscotch game surrounded by the alphabet. 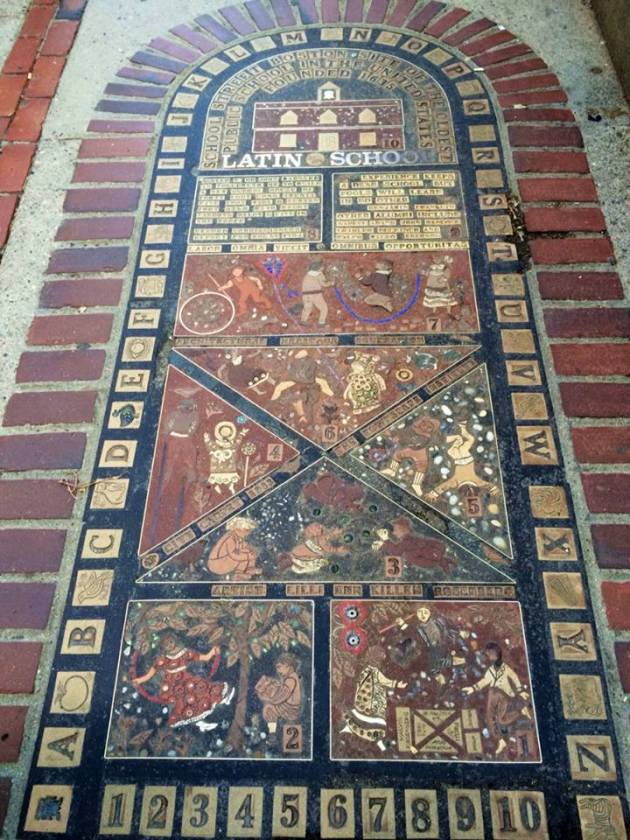 Right next to the Boston Latin School site was King’s Chapel and Burying Ground. The burying ground is the oldest in Boston and was the resting place of many early colonists including Mary Chilton, the first woman to step off the Mayflower. The King’s Chapel was built on a corner of the Burying Ground which was seized by England as no one was interested in selling land to England for the purpose of building a church.

Down the street from King’s Chapel was the Granary Burying Ground. The Granary Burying Ground is the third oldest burying ground in Boston and was the resting place for several of the signers of the Declaration of Independence, Samuel Adams and John Hancock, and others such as Benajmin Franklin’s family, Paul Revere and even Mother Goose.

Finally, down the street and around the corner from the Granary Burying Ground was the State House and Boston Common. The State House was once owned by Massachusetts’s first elected governer, John Hancock, and was of course where state political business took place.

Boston Common was the oldest park in the country and was originally used to herd cattle. Over time it became the location for public hangings and during the Revolutionary War the British troops were camped there.

After completing the Freedom Trail we walked over to the Make Way For Ducklings statues in the Public Gardens and enjoyed our cannolis from Mike’s Pastry in the shade of a tree (I watched, as they were not vegan). We then made our way over to City Hall Plaza for the concert.

I have never been much of a history buff (though my wife certainly is), but it was pretty awe-inspiring to stand at so many locations that were key in our country’s revolution and to think about the people that put aside their lives and livelihoods in order to lead that battle.

They that can give up essential liberty to purchase a little temporary safety, deserve neither liberty nor safety.
—Ben Franklin