When I purchased my commuter bike this year, one of the reasons I chose a touring bike over a cross bike was so I could do some bike camping. As September rolled around I took a week off from work to do some hiking which was the perfect opportunity to try out a bike and hike. I had been eyeing the 4000 Footers in the Sandwich Range and knew I wanted to complete them as traverse.

After some bike route and trail planning, I put together what I thought would be a great bike and hike. I would bike from Gorham, ME to the Kancamagus, drop my bike off at the Oliverian Brook trailhead, walk along the Kancamagus to the Sabbaday Brook Trail, spend three days hiking along the Sandwhich Range, and then bike back to Gorham.

END_OF_DOCUMENT_TOKEN_TO_BE_REPLACED

I haven’t posted in a whole month. We are working on purchasing our first house (which is taking up most of my free time) and my only recent adventure was a 4-day epic hike in the Emigrant Wilderness in the Sierra Nevadas. There is a massive amount of photos and video, so it is taking a long time for me to write the resulting blog post (look for it upcoming). In the meantime I thought I’d throw together this quick post of my first long biking trip with my Surly Long Haul Trucker.

My family’s plans for Memorial Day weekend were to clean out the garage, take several trips to the dump, pack up a majority of our belongings (things we wouldn’t need for a few months) and start moving stuff out of our rental. A monumental list to attempt. When it became clear that we would need more weekends to succeed I made plans to get out of the house and venture more than 10 miles on my bike (the length of my commute and the furthest distance I had gone).

I use the app Strava to track all my biking (and running) activity and I recently signed up for a challenge to bike 100 kilometers in one trip, so I set about finding a route that would be at least 62 miles long. After a little playing around on Google Maps and MapMyRide I landed on doing a big loop around Sebago Lake. I used Strava’s route capabilities to plan the exact route since it has a feature to select the route based on popular roads. I figured the roads Strava users stuck to would be the most pleasant on which to bike.

I spent a late evening memorizing the turns I would have to make (and using Google Maps Street View to pick out landmarks) and then packed for the big trip. On Memorial Day I went to town on the 8:25am boat and hit up Whole Foods for a few Clif bars, a banana, an apple and a Vitamin Water (with electrolytes). I strapped on my GoPro and hit the road.

Time-lapse video of cycling to Sebago Lake
Music from Free Music Archive: “Amsterdam” by LASERS
I left Portland via Washington Avenue after biking around Back Bay. Luckily, it was still fairly early and Washington was pretty quiet so I didn’t have to worry about cars. From Washington I jumped on Route 100 and then onto Blackstrap Road. Blackstrap was a nice change visually from the city streets I had just left, but it didn’t have much of a shoulder and cars cruised down it at higher speeds. My biggest climb of the day was going up Blackstrap Hill Preserve, and shortly after I turned onto Babbidge Road which turned into Falmouth Road. These roads cut through some farmland and eventually hit Route 115 which took me to Route 302 in Windham.
I was not looking forward to 302. It was busy and loud and not kind to the eye. But, it really wasn’t that bad as it had a wide breakdown lane the entire way. I made my way through the bustle (nearly being right-hooked by a car in Raymond) until State Park Road in Casco.
Riding through Sebago Lake State Park was definitely the highlight of the trip. The number of cars dropped down to nearly none and trees rather than shops, amusement parks and restaurants lined the road. I paid the $4.50 to enter the park and made my way to Songo Beach, which was surprisingly not very crowded. I enjoyed my lunch at the water’s edge with a Mallard duck couple while watching the far shore.

After my quick lunch I got ready to go and bumped into my good friend Chomba who was having a barbecue a few picnic tables over. We laughed at the coincidence of two Long Islanders randomly meeting up in the middle of nowhere and he told me about his plans to hike Katahdin the following weekend (good luck!). 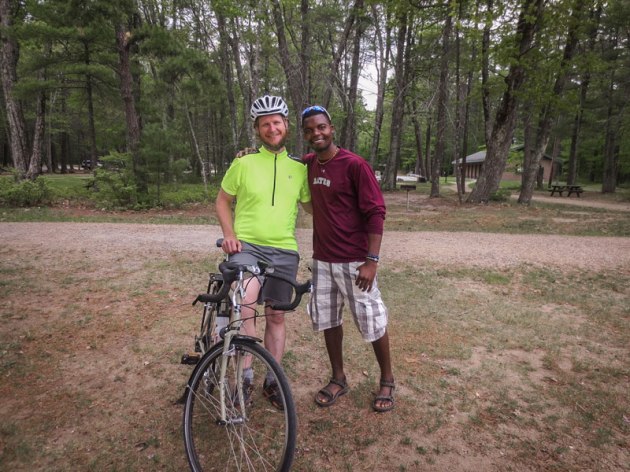 Leaving Sebago Lake State Park I crossed Songo Lock and then headed south on Route 114. 114 would have been an amazing ride except that it had zero shoulder and it was peppered with cars and motorcycles absolutely flying down it. Everyone was respectful of my space with the exception of a group of motorcyclists who purposely buzzed me and gunned their engines as they passed, attempting to make my eardrums bleed.

Shortly after Steep Falls Wildlife Management area I hit my wall. My hands were going numb and my wrists, elbows and shoulders were aching. Luckily, not too much later I got off 114 and jumped on the Mountain Division Trail. The Mountain Division Trail was a multi-use trail built along the defunct Mountain Division Railroad. The trail started off gravelly and steep in places but once it paralleled the rail it was paved, straight and flat. It was a pleasant ride, especially the trestle Gambo Bridge crossing the Pleasant River.

After the Mountain Division Trail I jumped on River Road and followed it into Westbrook. In Westbrook I went through some neighborhoods and crossed the Brown Street trestle bridge (walking my bike) where I saw kids jumping into the Presumpscot River. I wrapped up my ride by following Main Street and Brighton Avenue back into Portland.

I was psyched to be able to accomplish such a long ride. I left hoping I would be able to but prepared to turn back short of Sebago Lake and find an alternative route. I successfully completed my first 100k ride and plan on doing a 75 mile ride next (which will include two small mountain hikes).

Map of trip (view on Strava)