This spring my son turned 12 and I asked him if he’d like to start doing the New England 4000 Footers with me. With Dad being so busy with work and having little time to spare for the boys, he was quick to say yes. In a repeat of last weekend (but with my son as the subject matter), my wife suggested that I go for a hike and bring him along, as he had been grumpy lately. A friend at work had told me how nice of a hike Burnt Meadow was and I passed it every time I drove up to the White Mountains, so I decided this time we’d stop and give it a hike.

We arrived at the trailhead’s parking lot at 11am. There were a few cars in the lot and about 8 women with a couple of dogs preparing for their hike. My son and I quickly gathered our stuff and hit the Burnt Meadow Trail ahead of them. The trail climbed up to a sub peak on the ridge. It was not overly steep and the fun terrain made it pass quickly. Within a few minutes we had a view of the Saco River valley through the leafless trees.

An hour after we set off we were climbing up the ledge scramble before the North Peak. I let my son get ahead so I could take some shots of him climbing and then we hustled to the peak to enjoy some lunch before the crowd below caught up. 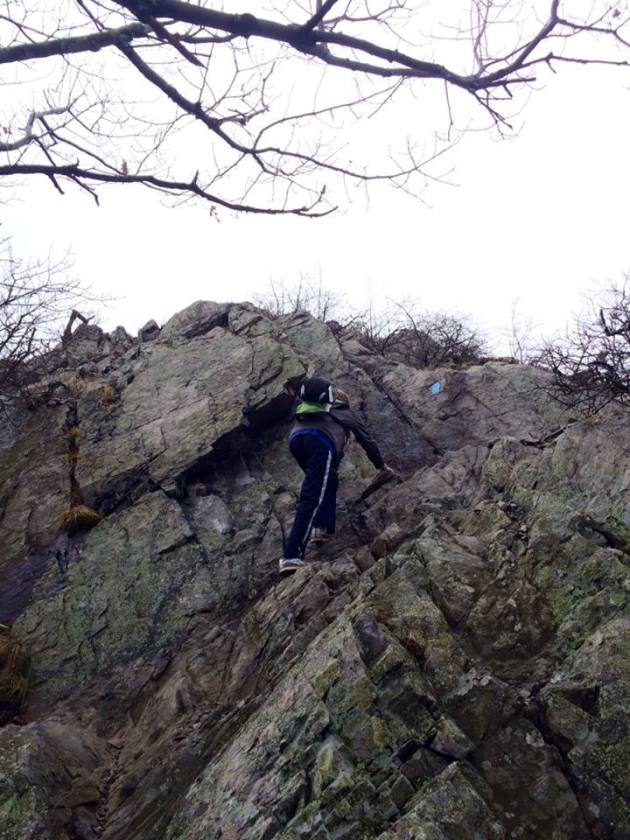 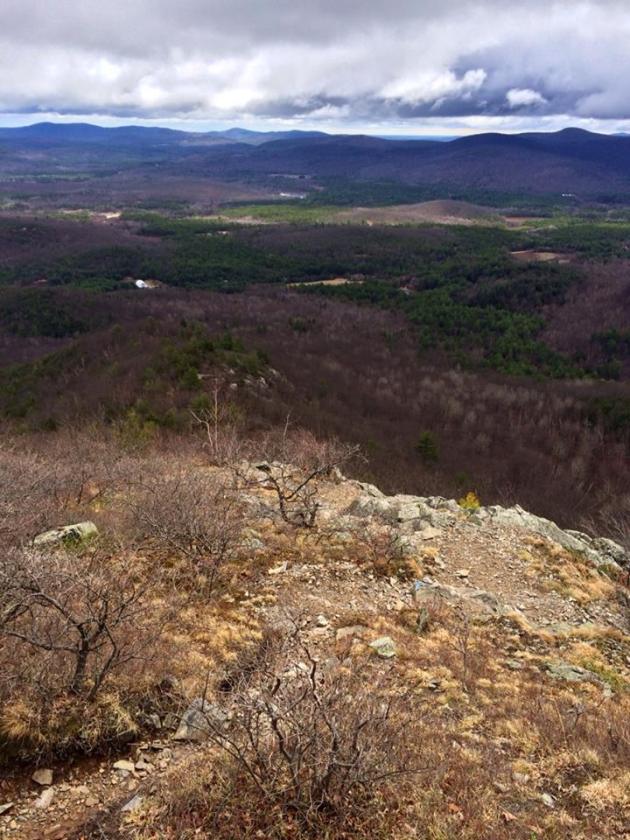 Looking back down the Burnt Meadow Trail

The North Peak summit was wide and flat with some rocks and trees spread out across it. We chose a spot off the trail on some rocks facing Pleasant Mountain (which I hiked the previous week) to the north. We enjoyed lunch and talked about the little things in life; the stuff I normally don’t have the time discuss with him. 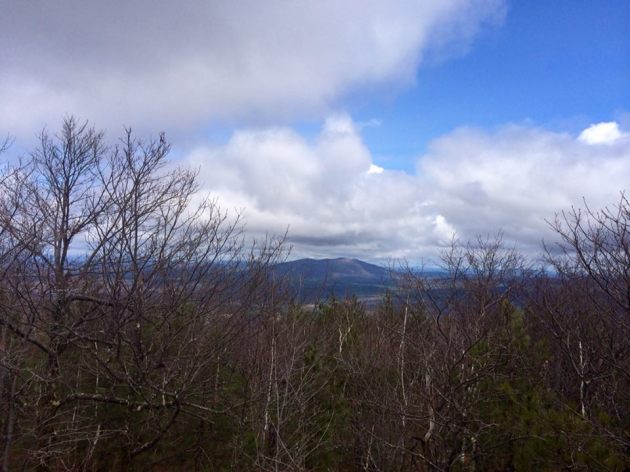 Pleasant Mountain from the North Peak

We cleaned up our lunch (and some other trash and cigarette butts) and continued on down the Burnt Meadow Trail. Soon after the peak the trail changed to the Twin Brook Trail and descended the western face of the mountain. Again, the terrain was interesting, rocky and twisting, which made the descent quick. At one point we had a good view to the northwest and where the White Mountains should have been, but it was too cloudy to see anything but their foothills.

Twin Brook Trail followed a sub ridge of Burnt Mountain and then dropped to the south side of the mountain into some thick but young forest. There were signs of heavy snows or ice storms in the past, as many of the young trees were bent over in a permanent bow toward the ground. We trudged along to the spur trail for Stone Mountain, the taller of the Burnt Meadows summits. We took the trail which switchbacked up the northern face of mountain for three quarters of a mile.

The Stone Mountain summit was very peaceful. Where there were small crowds and the distant sounds of trucks and chainsaws on the North Peak, all we found on Stone Mountain was calm and silence. My son and I followed the path to some rocks on the northwest end of the summit and sat and rested for a while. My son reviewed some of the photos he had taken. I faced the South Peak and meditated. It was one of the most peaceful moments I had experience in hiking. The absolute silence was broken only by the occasional breeze through the bare tree tops and the distant shrill of a hawk. 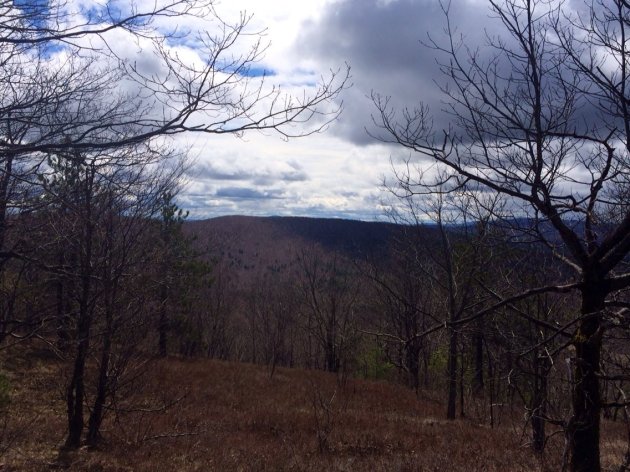 Before heading back to the trailhead we checked out an ledge overlook to the south of Stone Mountain. The view was toward Cutler Mountain and the flatter region of Maine toward the coast.

We took Stone Mountain Trail back down to the col between Stone Mountain and the North Peak of Burnt Meadow. Twin Brook Trail followed the contours of the mountain, around a ridge and back to the Burnt Meadow Trail. Along the way it crossed a few brooks and weaved through more young forests. Some gray clouds had rolled in and the scenery was startlingly stark in the different shades of gray. 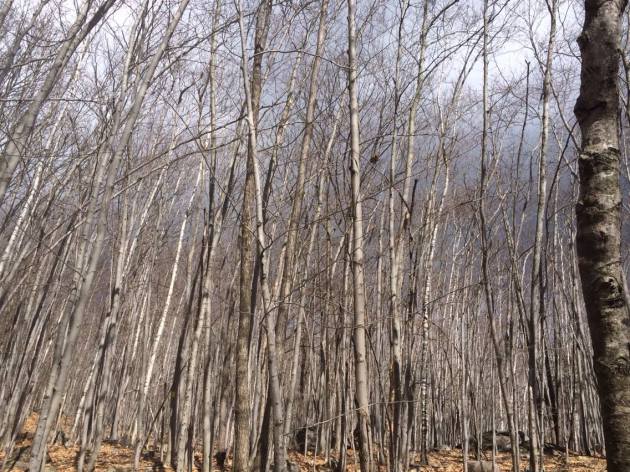 We made it back down to the parking lot just as the large group of women and dogs were packing up to leave. They either spent quite a while on the North Peak or hiked the loop like we had but bypassed the Stone Mountain trail. I picked up some more trash from around the parking lot and then we hit the road.

My son did pretty well for his first hike while carrying his own water and food, and his first hike of the year. Hopefully by the time the snow and ice has melted off the high peaks he will have had a few more hikes under his belt and be ready for some 4000 footers.

If we want children to flourish, to become truly empowered, then let us allow them to love the earth before we ask them to save it. Perhaps this is what Thoreau had in mind when he said, “the more slowly trees grow at first, the sounder they are at the core, and I think the same is true of human beings.”
—David Sobel 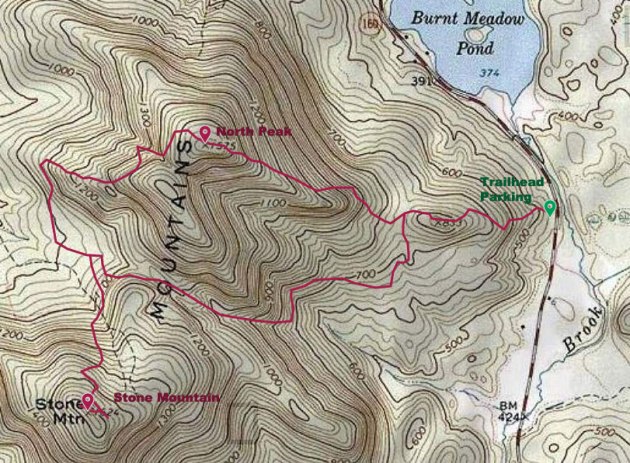