Mount Mansfield got its name from its ridge line looking like the profile of a person. The peaks of the mountain were given names based on their resemblance: The Forehead, The Nose, The Adam’s Apple, and the highest point, The Chin. On the morning of my brother’s wedding he decided to climb Mount Mansfield to The Forehead and write his vows. Our friend and I joined him for the excursion with the plan to continue on to The Chin so that I could bag it for my 4000 Footers and State High Points lists while giving my brother some time to think and write, as well as taking his dog so he wouldn’t get fidgety.

It was a windy day with thick clouds at around 3000′, but this did not discourage us. We weren’t hiking for the views, they were just niceties. We chugged up Frost Trail and Maple Ridge Trail and eventually broke out of trees and had a view back toward Burlington and Lake Champlain, though the scenery blurred into the haze at that distance.

There were a whole bunch of open ledge spots on the hike with limited views of the surrounding mountains and valleys. I’m sure the hike would be amazing on a clear day. Eventually we hit the cloud line and no longer had any views. 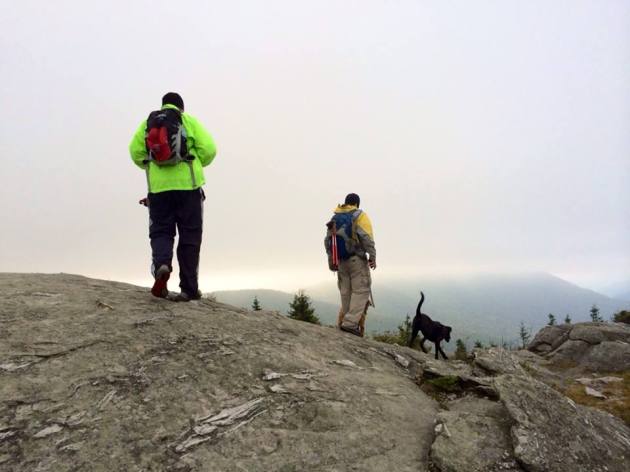 Just Below the Clouds

There were two difficult portions of the hike, The Cut and The Gap. We got to The Cut while my brother was still with us. It consisted of about a 20′ cliff with a narrow shelf, or cut, running up the face of it. The dogs hesitated trying to climb up the rock wall. I noticed a side trail that appeared to loop around The Cut and rejoin the trail above. I took the trail and the dogs followed me to the top. As I stood at the top and looked down, my brother looked up and said: “Don’t take any risks on your wedding day, right?” 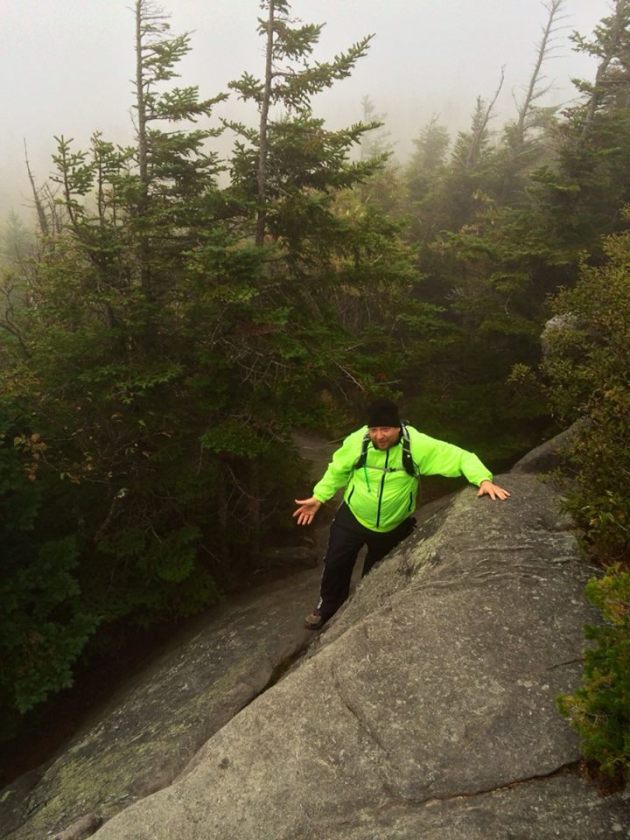 We continued up the rocky ridge in the clouds. The dogs ran ahead and then looked back at us, and then ran back to us. They must have hiked twice as far as we did. 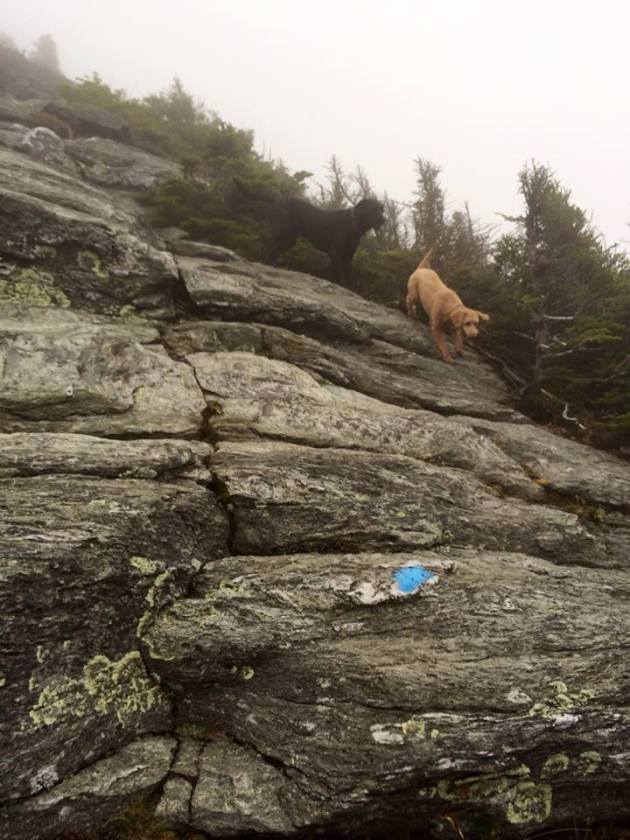 My brother stopped just before The Gap to write his vows. I took his dog from him, and our friend and I continued on. The Gap was about a 6′ jump slightly down from one ledge to another. It really wasn’t challenging for an adult, but it probably would be for a child and the dogs definitely did not like the idea of jumping across. My friend took it upon himself to pick up each dog and make the jump for them. I had busted a rib the day before and didn’t think I could pick a dog up, let along jump across The Gap with one.

As we climbed to The Forehead and then made our way along the Long Trail past The Nose and to The Chin we talked about how we could move out of our current careers and get paid to hike and travel the world. It is a common conversation theme when I hike with my hiking friends. We all have the passion, means and motivation to pull it off, so maybe this blog will become more exotic in the future.

As we moved quickly along Mansfield’s profile we started passing and getting passed by other groups of hikers. Despite it being cloudy and cold, and the wind gusting up to 50mph, the mountain was crawling with dedicated hikers. My brother’s dog growled at a couple of them, which made me uneasy as he is normally easy tempered. I had never hiked with a dog under my responsibility before, so they weren’t the most comfortable situations. I felt like the other hikers must have startled him, popping out of the clouds as they had with their scent blowing away with the wind at our backs.

As we approached The Chin we passed an antenna installment that was humming like a jet plane in the wind. Shortly thereafter we made the summit, had a snack and headed back down. There was no time for celebrations and the weather didn’t agree with standing still for too long. 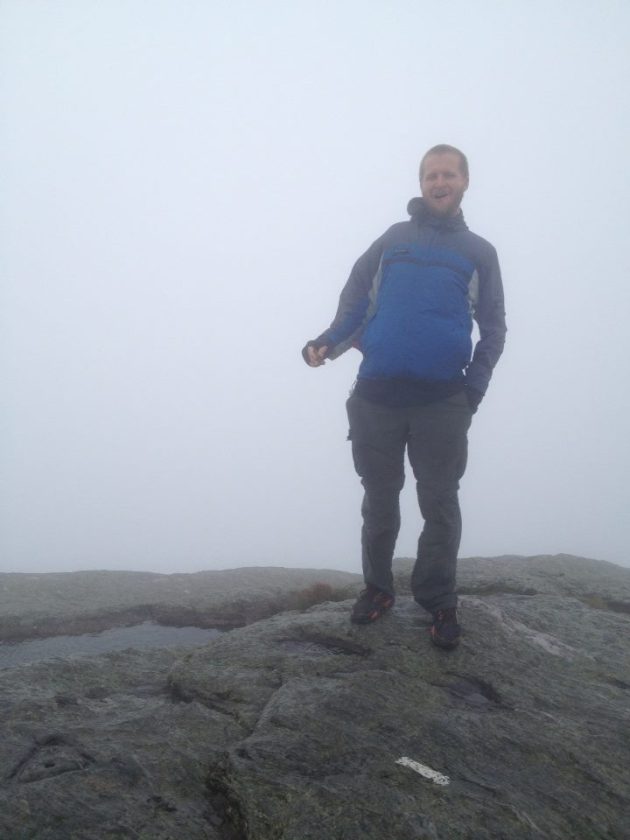 As we were approaching The Forehead again I got a text from my brother that said he was getting cold waiting for us and was heading back down. We were behind schedule so we picked up the pace as much as we could on the slick descent. When we got back to The Gap my friend jumped across and then whipped out a bag of dog treats. Both dogs made the jump without hesitating and sat patiently for their treat. We likewise had no trouble climbing down The Cut with the dogs. This time I down-climbed it and my friend led the dogs around.

As we hustled down Maple Ridge Trail and then Frost Trail we got word from other hikers that a guy with a bright yellow t-shirt was just a few minutes ahead of us. We watched my brother’s dog, wondering when he would catch scent of my brother. As we hit the bridge at the bottom of the trail with the parking lot nearly in view the dog took off for my brother.

My brother’s vows were inspired and heart-felt. Even though it was cloudy and cold I will always remember this hike because of its meaning to my brother and the fact that he wanted to include me on that most important day of his. My brother was the catalyst for me getting out on the trail and many of my fondest memories are hiking deep in the mountains with him. I’m glad that hiking means so much to him as well, and that he would include it in his wedding day ritual.

No matter how sophisticated you may be, a large granite mountain cannot be denied—it speaks in silence to the very core of your being.
—Ansel Adams 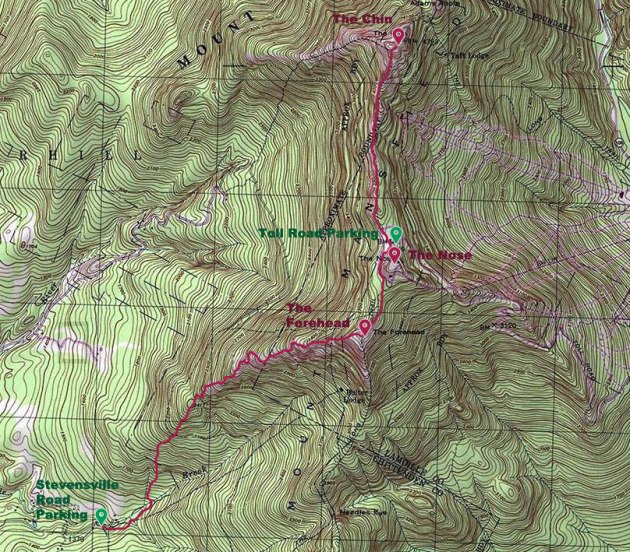