One of my goals for 2015 was to do a Moonlight Presidential Traverse. Back in December when I started looking into moonlight traverses the two full moons that landed on the weekends were in July and August. I chose August because it was later in the summer (and I knew I would be moving in early summer), and because it was a supermoon.

In the end I convinced my friend John to join the hike when I scaled it down to a loop of the northern Presidentials with the possibility of tacking on Washington if we felt up for it.

END_OF_DOCUMENT_TOKEN_TO_BE_REPLACED

One of this year’s big hikes for me was a one day attempt at the Presidential Traverse, a hike across the Presidential Range in the White Mountains National Forest. The hike typically consists of summiting all of the peaks that are named after presidents, though there are other variations which include the other peaks along the range.

A friend from work and my brother joined me on this hike. We decided to tackle the traverse from north to south to get the big and strenuous mountains out of the way and to just do the classic version of the traverse: Madison, Adams, Jefferson, Clay, Washington, Monroe, Eisenhower and Pierce. We arrived at Appalachia parking lot at 5:00am as the sun was rising.

We chose to summit Madison via Airline Trail rather than the more typical Valley Way as I had hiked it just two weeks before when I climbed Mount Madison with my son. Airline did not seem more difficult than Valley Way, though it was definitely more exposed. Where Valley Way climbed gradually into its steep elevation gain and became more difficult near the top of its trail, Airline got the elevation out of the way earlier and once it climbed out of the trees and onto the ridge it leveled off some.

I was also excited to take Valley Way as I heard that from the Knife Edge, a section of narrow trail on the ridge, you could see one of the best examples of the difference between a glaciated valley and a valley carved by running water. The ravine had steeper walls and a bowl shape at the bottom and the valley was v-shaped with more gradual slopes.

After enjoying the spectacular views at the top of Airline we stopped at Madison Spring Hut where my brother rested while we climbed Madison. Even though I had recently climbed it, I still enjoyed the rocky climb up to Madison’s peak. As apposed to two weeks ago, the weather was clear and the view of Adams, Washington, the Wildcats and Carters was magnificent.

After climbing down Madison we headed up Adams. I’ve always enjoyed climbing Adams, though it and Jefferson always seem to burn me out. The talus of Adams was spectacular but I could already feel my energy waning.

We continued on past Thunderstorm Junction and the bizarre terrain between Adams and Jefferson. We stopped for a break at Edmands Col so that a large group of hikers could get far enough ahead of us that we wouldn’t have to pass them on the steep climb to Jefferson’s peak. 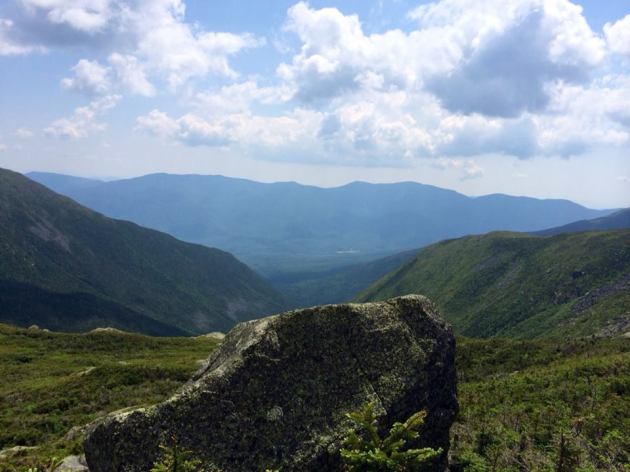 Like Adams and Madison, Jefferson was a strenuous hike up rocky terrain. Jefferson was always my least favorite of those behemoths due to its many false peaks when climbing it from the north. We took a short break on the summit and then pushed on ahead of the large group that had climbed up before us.

Looking ahead from Mount Jefferson

At Sphinx Col we stopped and were greeted by a United States Forest Service volunteer wielding a large GPS unit. He said they were collecting data on hikers and asked us where we had started hiking and where we were going. We asked him how high the climb to Clay was and he said about 700 feet, roughly the same as the climb down from Jefferson.

The night prior to the hike we had agreed that we would bypass Clay as we had all done it before and it was not an official 4000 Footer. Halfway around Clay we started discussing the pros and cons of bypassing Washington as well. It was already past noon and we hadn’t hit our halfway mark and none of us were thrilled to make the push to the summit and be greeted with buses and crowds. My only reluctance was that I was depending on the cafeteria on the summit to provide my big meal for the day. All I had left for the day were two Clif bars and two small packets of peanut butter. But, since the others would be able to get food at Lakes of the Cloud, they could spare me their Clif bars if needed.

Looking back from near Mount Clay

Once we got around Clay and started the hike toward Washington we took Westside Trail under the cog railway and around Washington. Westside Trail was enjoyable as I had never hiked it before. We had good views down into Ammonoosuc Ravine and had a different perspective of Lakes of the Cloud. I started to bonk on the descent to Lake of the Clouds and the southern Presidentials, but one of my packets of peanut butter got me to the huts. Along the way we passed another US Forest Service volunteer counting people hiking between Washington and Lakes of the Cloud.

We took a short break at Lakes of the Cloud. I ate my other peanut butter packet and a Clif bar and refilled my water. We had hit the crowds again, it had been quiet since we bypassed Clay and now people were milling about everywhere. There were boy scouts running through the alpine grasses and a tired man with his son and dog trying to convince the hut croo to let him stay in the Dungeon, the hut’s basement. He didn’t think they could hike back down before dark and there were afternoon thunderstorms in the forecast. There was also a young family with several kids, the dad was hiking with one of the kids in a Cadillac-sized carrier on his back. Rugged.

We picked up as the tired father and son got permission to stay in the Dungeon and pushed toward Monroe. Monroe, Eisenhower and Pierce were new mountains for my brother. When we attempted the Presi Traverse in 2012 we got trapped in a thunderstorm. When it had a cleared a bit we bypassed Monroe and took Edmands Path to Pierce road.

I enjoyed the climb up to Monroe, the headwall on the north side is a fun little scramble and the view looking back toward Washington is amazing.

Lakes of the Cloud and Mount Washington from Mount Monroe

We descended Monroe and enjoyed the long flat hike between Monroe and Eisenhower. We passed the Mount Franklin spur path and continued on toward Eisenhower, not wanting to add any unneeded climbs. Clouds were starting to roll in pretty heavily once we got to Eisenhower, but we were below their altitude at that point. On top of Eisenhower the clouds formed a perfect crown just above its summit. 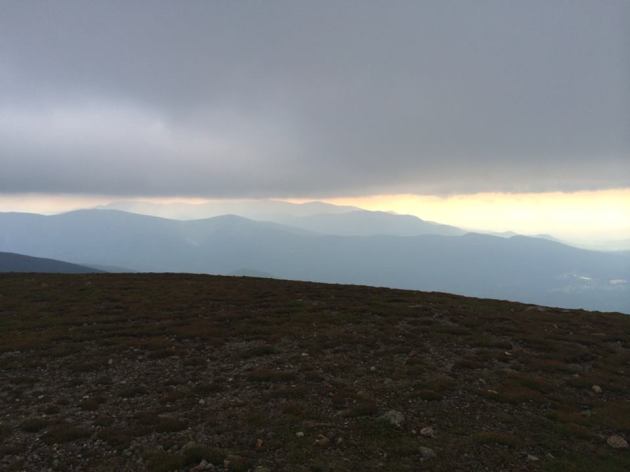 After Eisenhower we made the trek to Pierce, popping in and out of the treeline. This was usually an enjoyable section of the trail, but I was so worn out at this point that each time we went above the trees it felt like we were no closer to Pierce. We finally hit the junction with Webster Cliff Trail and dropped our packs. The hike up to Pierce was easy and short. We stopped for a few minutes, my brother and I drank celebratory beers we had carried the whole way but the black flies kept us from resting for long.

The hike down Crawford Path was like most descents after a big hike: long and arduous. We hit the parking lot at Pierce Road at 8:30pm, about fifteen and a half hours after we started. We had bypassed Washington, but all agreed that it was a successful hike. At the time I had said I was done with the Presidentials for a while, especially the northern peaks. But now I want to attempt the hike again, including Washington. I guess it will have to wait until next year as the days are getting short.

It is not the mountain we conquer but ourselves.
—Edmund Hillary