Since last winter I’ve tried to build an igloo in my backyard so I could experience sleeping encapsulated in snow. Though Maine has been pounded with snow in the last couple of weeks it hasn’t passed the snow ball test (is the snow sticky enough to hold a snow ball shape?), which is required in order to form the blocks for the igloo. Fortunately, the AMC’s blog recently posted an article on building a quinzee, and I tried it out.

I started by shoveling as much snow as I could manage into a pile in my backyard. This took about 2 hours and I ended up with a pile of snow that was roughly 7 feet high, 12 feet long and 6 feet wide. Next I climbed on top of the pile in order to pack it down as much as possible. When I was done the pile was about 5 feet high.

At that point I went inside to make lunch and let the pile refreeze. When the snow was piled up, the snow flakes’ arms broke which caused some melting at the point of the break. By waiting at least an hour this allowed the snowflakes to refreeze, making the snow pile more stable.

After Lunch I returned to the pile with a short-handled spade shovel and metal mixing bowl. I started carving into the pile about a half a foot above ground level. I would have preferred to start a foot above ground (as you should have at least a foot of packed snow to insulate you from the frozen ground), but I wanted to make sure I had enough head room to sit up inside and have walls at least a foot thick for stability.

Shortly after starting with the spade shovel I could no longer reach or get the right angle with the shovel and I started climbing into the hole and scraping the walls and ceiling with the mixing bowl. It worked wonders. I continued carving into the the pile as well as toward the ceiling and walls. Once I had a substantial amount of snow dug out I crawled out of the quinzee and drew the snow out behind me with the snow shovel.

I measured into the snow pile with the snow shovel to make sure I didn’t shovel too far in any direction. The AMC article suggested sticking foot-long sticks into the quinzee so that you knew when you were getting close to the walls, but I could tell as the walls would lighten from sunlight if I dug them too thin.

I repeated the digging/drawing snow out of the quinzee process until I was content with the shape and size of the interior. I sat cross-legged in the middle to make sure the ceiling was tall enough, and laid down on the floor to make sure I had enough leg room to sleep within. 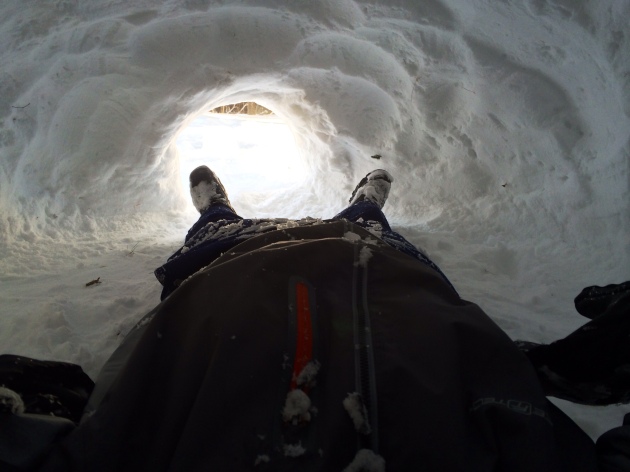 From within, enough room to stretch

I had plans to sleep inside the quinzee, so I got my air pad and fleece sleeping bag liner and placed them inside. I also placed the plastic container that I used to make igloo blocks inside as a table for my battery operated lantern. Just to decrease any concerns I had of the quinzee collapsing I climbed on top and bounced around on my knees (I’m sure I was quite the sight). My quinzee was complete and ready to become a winter shelter.

Unfortunately, the forecast for that night was temperatures around 0 degrees and it did not warm much above 10 degrees for the following couple of weeks. Since it was built the quinzee partially collapsed (I’m guessing due to a few warm and sunny days) and the ceiling which was over 3 feet tall is now less than 2 feet tall. I did not get to sleep in it, but it was a fun experience. Hopefully the weather will cooperate and I’ll be able to build another quinzee or an igloo and actually get to sleep in it.