Each fall a couple of friends and I try to take a long weekend to do some backcountry hiking and camping. In 2016 we planned a multi-day hike in the Great Range in the Adirondacks in New York. For me, this was the start of a new peak list. Having recently finished the New England 4000 Footers, I was looking forward to the Adirondacks 46 High Peaks. So, we took a Thursday and Friday off and headed to New York.

For this hike we parked at Garden, hiked up to The Brothers, Big Slide Mountain and Yard Mountain, hiked down to Johns Brooks Lodge and then halfway up to the Wolfjaws to camp at Wolf Jaw campsite. On Friday we hiked up to the Great Range and traversed Lower Wolfjaw, Upper Wolfjaw, Armstrong Mountain, The Gothics, Saddleback Mountain, and Basin Mountain and then hiked down to Slant Rock campsite. On Saturday we hiked up to Little Haystack and Mount Haystack before heading back to Garden Parking, following the valley out. The hike was over 24 miles and included 10,000 feet of elevation gain.

It was a five hour drive from where we lived to Keene Valley, New York, so we started in the dark on Thursday morning. We needed to rent a bear canisters so we stopped at The Mountaineer, an outdoors equipment shop, for the canister and some other supplies. I spilled my coffee down the front of my shirt on the drive, so I picked up a new shirt so I wouldn’t smell like food in bear country.

We arrived at Garden parking at 11:15 am and easily found a spot since it was Thursday. We decided that we didn’t want to hike directly to Wolf Jaws campsite to prepare for our big day tomorrow. Instead we would climb the range opposite of the Great Range to hiked another Adirondacks 46 High Peak and get some views of the Great Range. We signed the log at the trail head and headed up the trail toward The Brothers.

The trail climbed moderately up toward The Brothers, some ledgey peaks to the east of Big Slide. We moved along at a decent pace, getting used to the weight of our packs on our backs. The only excitement of the morning was when we noticed a piece of paper pinned to a stump that read: “Bees!” We hustled up a small switchback and could hear the angry buzzing of yellow jackets as we passed a rotting log. Luckily, none of us got stung.

A little after noon we reached Little Brother and an hour later, Big Brother. We also had our first good view looking down the length of the Great Range.

View of Wolfjaws, Armstrong and The Gothics from The Brothers

On ledges below The Brothers

From The Brothers the going was pretty easy until right before Big Slide Mountain. We climbed up some steep granite to get to the summit. It was about 2:00 pm so we stopped for a late lunch. We shared the summit with an older couple and a few other hikers and took in the amazing view.

After Big Slide we continued along the range to Yard Lookout. The trail was easy along the ridge, but dropped steeply after Yard. A few hours later we trudged up to Johns Brook Lodge and rested our packs next to some picnic tables for a break. We refilled our water and did other Lodge activities, like see how many pull-ups we could do from the porch rafters. Hanging from the porch was a heavy duty scale, so we all took turns weighing our bags. Mine came in just under 40 lbs. 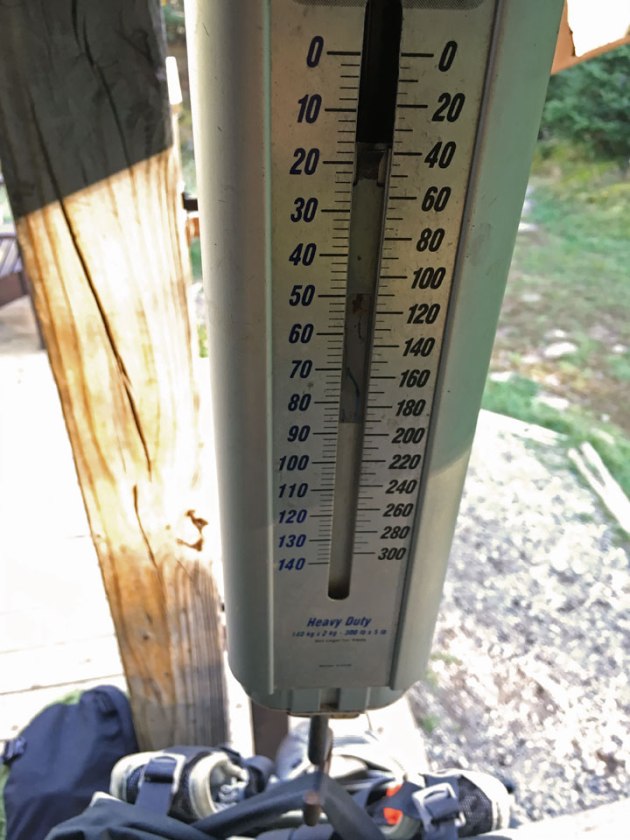 We left behind Johns Brook Lodge and on the other side of the river began our ascent of the Great Range. After crossing a dry river bed we searched around for the illusive Wolf Jaws campsite, expecting to find a lean-to. Eventually we settled into a hardened spot in the forest between the trail and the river bed. 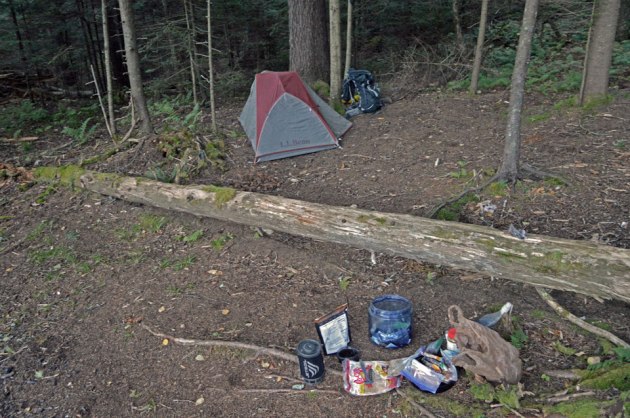 We had our tents set up and were settled into dinner before 7 pm. As soon as it got dark we hit the sacks, tired from the strenuous day.

We were not in a super hurry in the morning. We got up with sunrise but took our time to have breakfast and pack up. At 8:15 am we continued on our way up the trail toward the Wolfjaws.

Soon after we started the trail climbed intensely toward the notch between Lower and Upper Wolfjaw. At the trail junction between the two peaks we dropped our packs, and hustled up to Lower Wolfjaw, it was only 9:10 am when we stood on the granite at the summit, trying to peer over the trees at a limited view.

After retrieving our packs, it was a hard climb in the other direction to Upper Wolfjaw. After a false summit with a large boulder on it (onto which I climbed) we got to the summit of Upper Wolfjaw at 10:50 am.

After a short breather we continued toward Armstrong Mountain, which was an even harder hike. Sections of the trail traversed up rock faces and over small ledges. We made it to Armstrong just before noon and sat on its ledge, in the sun and enjoyed lunch.

It was a much more manageable climb up to The Gothics, where we arrived an hour later. The Gothics lived up to their unique name. The steep peak provided great views in all directions.

View from The Gothics looking down Great Range

I was particularly fond of the view to the south of the Ausable Lakes nestled below the Sawteeth Range.

The southwestern end of The Gothics ended abruptly with a granite cliff. 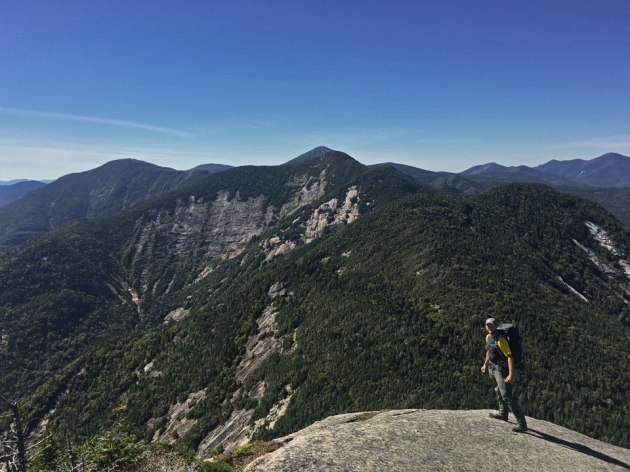 About to head down from The Gothics

Off to the side the trail continued down the mountainside. Some cables that were proved for safety while climbing or descending the steep granite face. 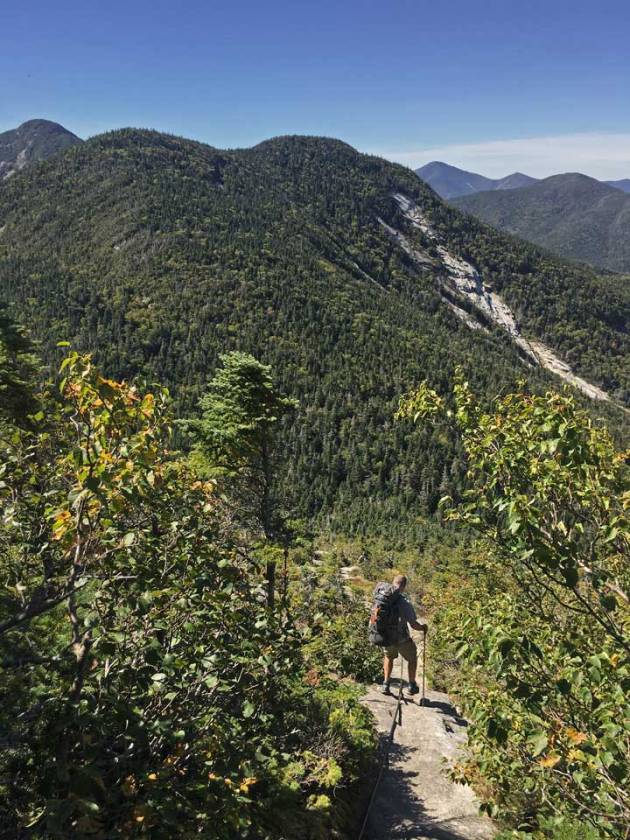 Heading down cables on The Gothics

With the nice dry weather we found the granite to be grippy and the cable not really needed. Which was good because we often hear horror stories about climbs that require cables.

Right after getting to the bottom of The Gothics we started a steep climb up to Saddleback Mountain. The Great Range was no joke with its ups and down. At 2:30 pm we got to the vista at the second bump of its ridge. There was a nice view toward Basin Mountain, so we stopped for a snack. 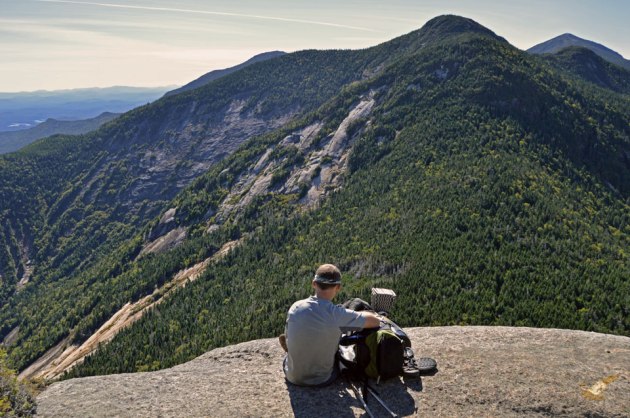 We thought that The Gothics was going to be the difficult descent, but as we passed people hiking the range in the other direction they asked us if we were going down Saddleback with our heavy packs. As we started down the mountain we realized why.

At the top of the ledges of Saddleback

The climb down was over steep granite ledges with yellow arrows painted on the rock for the suggested route. We picked our way slowly, but at one point I still got rim-rocked. I was on a steep bit of ledge with very little grip, and my pack was pushing me forward, making it hard for me to create enough friction to have confidence in my next step. I had to remove my pack and hand it up to my friend so I could down-climb without it.

Again, the steep climb down a mountain was followed by another steep climb up. We got to the summit of Basin Mountain at 3:45 pm and had it to ourselves. We took off our shoes and socks and rested in the warm afternoon sun. It was the last peak of a long and arduous day.

Resting on Basin near end of day

We assumed that the trek down to Slant Rock campsite would be a gradual descent after a short steep section near Basin’s summit. What we didn’t expect was that we had to climb up over another ridge before descending to the campsite. It was a brutal hike that took all the remaining energy we had. We got to the tent sites near Slant Rock at 5:45 pm.

I dropped my pack at what looked like a good site and ran down the trail to check out some of the others and the lean-to. Two guys were occupying the entire lean-to by hanging their hammocks in it, an unorthodox approach. I returned to my friends and we set up camp where I had dropped my pack.

After we set up our tents we grabbed our stoves and bear canisters and walked down to Slant Rock, a huge rock by the river. We cooked and ate dinner there while other hikers trickled in and filled the other tent sites. As we were enjoying our rehydrated meals by headlamp we heard a hoot from the trees. Looking up we saw a little owl sitting on a branch just above our heads. It was a remarkable ending to a remarkable day.

On Saturday we once again got up with the sun and had breakfast. Since we planned on coming back to the same spot after getting in a day’s worth of hiking, we left our tents set up. Which meant light packs!

It was a rigorous climb from Slant Rock campsite to the Haystacks. After following the brook for a while the trail rose steeply over large rocks and boulders. A little after 9:00 am we got above the trees and had partial views around us. It was windy and clouds were blowing in and already starting to cover some of the peaks. We summited Little Haystack, going in and out of the clouds.

Haystack and Marcy in the clouds

After Little Haystack, the trail dipped down into a wide crevasse, which gave a reprieve from the wind. It was a steep, exposed hike up to the summit of Mount Haystack. We got to the clouded-in peak just before 10:00 am. We hunkered down behind a rock, out of the wind and had a snack.

We hiked back down the Haystacks and had plans to continue up to Mount Marcy, the high point of New York. But when we got to the trail junction we had to come to a decision. We were all pretty wiped out from the previous day and there were thunderstorms in the forecast for the afternoon and evening. If we headed out at that point we could make the drive home that evening and not have to camp in the rain that night. Eventually we landed on that decision.

We got back to our camp a little before noon and spent an hour packing up and eating lunch. The hike out was mellow, a long slow descent, so we made good time. We made it back to Johns Brook Lodge at 2:15 pm and Garden parking lot at 3:40 pm.

The parking lot was packed when we got there so we made haste to exit. On the way back to Maine we stopped for pizza at American Flatbread in Middlebury, Vermont, along Otter Creek in an old marble factory. It was a great meal (despite curdled creamer) to cap off the trip.

This was my first time hiking in the Adirondacks so I wasn’t sure what to expect. I thought I would be spoiled by hiking so much in the White Mountains, but the mountains were just a rugged and the views just as nice. I can’t wait to get back and chip away at the Adirondacks 46 High Peaks list.