On my last day in Moab, in August 2016, I went on a couple of hikes outside of the National Parks. My first stop was to Grandstaff Canyon (which at the time had been called Negro Bill Canyon, but has recently been renamed), home of Morning Glory Arch.

From the parking area on Utah Scenic Byway 128, I hiked up the canyon to Morning Glory Arch and followed the same route back. The trail was sandy and crossed a stream many times. There was also plenty of vegetation and shade. The hike was 4.5 miles with very little elevation and took me 2:15 to complete. 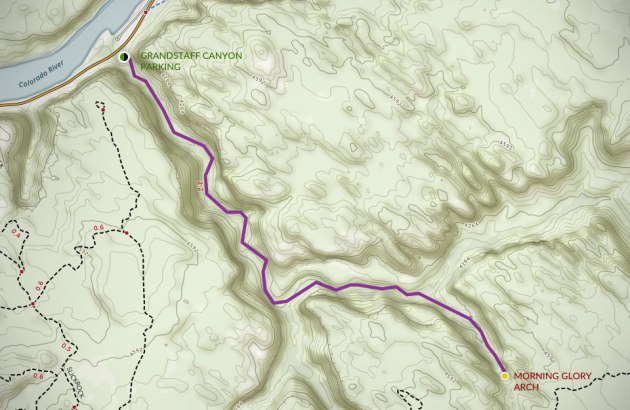 After breaking down my weekend campsite I made the short drive to the Grandstaff Canyon trailhead, arriving at 9:00 am. The temperature was in the 70s and the skies were finally clear. I could tell Grandstaff Canyon was a popular spot as there were already a half a dozen cars in the lot.

I followed the trail along a stream into the canyon, weaving through trees and cacti. Early on I passed what looked like an old cave or shelter in the canyon walls.

A cave just off the trail

I took my time heading up the canyon so I could take in the incredible scenery. After two days of hiking in the desert I was amazed by the amount of flora around me. A lot of the trees were oak, but much smaller than trees on the east coast. There was an abundance of flowers and blooming cacti as well.

Some of the abundant flora

The trail sometimes cut through deep grasses and trees near the stream’s edge and sometimes climbed up above it into more desert-like terrain. In a few places I even had to rock-hop through the stream.

The trail followed a stream for a while

In a few miles the canyon opened up, a branch of it heading east while the trail continued south. There was less shade so I could feel the heat of the day, but I also caught my first glimpse of Morning Glory Arch at the end of the canyon. 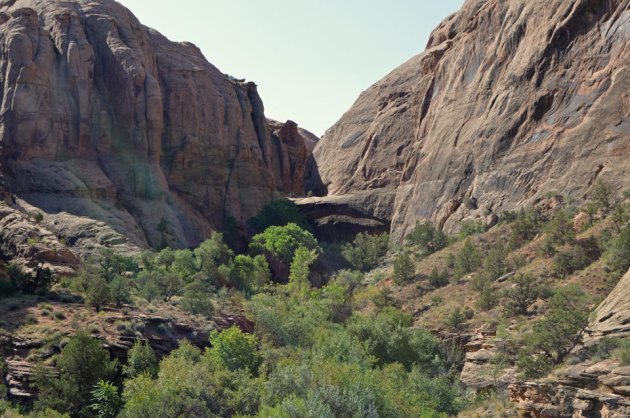 At 10:15 am I approached Morning Glory Arch and heard the echo of voices from the cavernous area below it. Looking up I saw people on top of the arch preparing to repel to the ground below. I explored the shaded area under the arch and had a snack while watching the canyoneering group. Later, on exiting the canyon and seeing their van, I learned that it was a company called Desert Highlights.

As I watched, the person began to repel to the canyon floor. I was just considering how they attached the rope and how they were planning on remove it when I saw another person repelling down the far side of the arch, counterbalancing the first.

When the canyoneer reached the floor, the rope was pulled up and over the arch and then coiled. Mystery solved. As the group packed up gear, I headed back the way I had come. I got back to my car at 11:15 am and immediately started the drive to my next hiking destination.

I definitely enjoyed this short hike on the outskirts of Moab. Since the National Park Service’s centennial weekend was over and there would have been a fee to enter one of the parks, it was a good free alternative. There was also plenty of shade from trees and the canyon walls, so this would be a good hiking choice on hot days.