On the second day of the National Parks Centennial weekend I drove from my campground in Moab to Island in the Sky District of Canyonlands National Park. Again my goal was to hike a long, primitive trail, so I headed across the park to Upheaval Dome.

Syncline Loop Trail was a 8.5 mile hike around Upheaval Dome. I followed it counter-clock-wise until I reached the junction with Upheaval Dome Spur Trail. I followed the spur trail toward the center of Upheaval Dome, but stopped short and turned around. Back at Syncline Loop Trail I continued around to the parking lot. Before finishing, I hiked to the First Overlook to look down into the crater. The complete hike was about 10.5 miles and took 6 hours to finish. The terrain was mostly desert, but there was varying vegetation in Syncline Valley, and steep descents and ascents over large boulders into Upheaval Canyon. 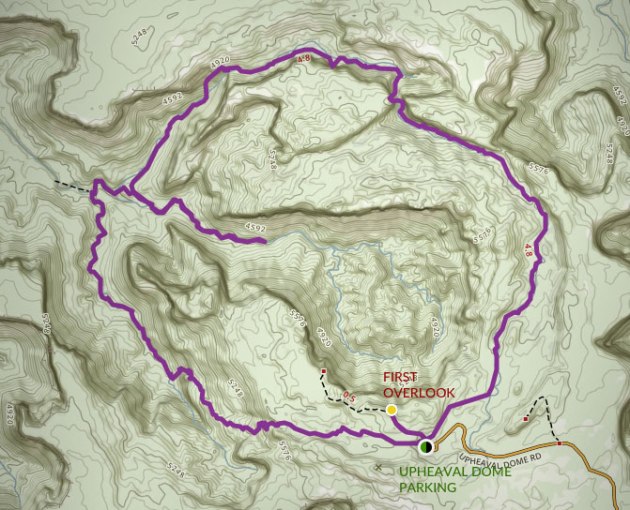 The drive from Moab to Island in the Sky was a beautiful drive. The road switchbacked up the mesa’s wall where the horizon fell away and provided spectacular views in most directions. Rain clouds were threatening, but that resulted in cooler temperatures.

I drove directly to Upheaval Dome, passing numerous pullouts and side roads that I would explore the following year with my family. I got to the parking lot at 9:20 am and found plenty of parking spots available. It was much quieter than Arches National Park was the previous day.

I walked a few hundred yards up Crater View Trail and found the junction with Syncline Loop Trail. 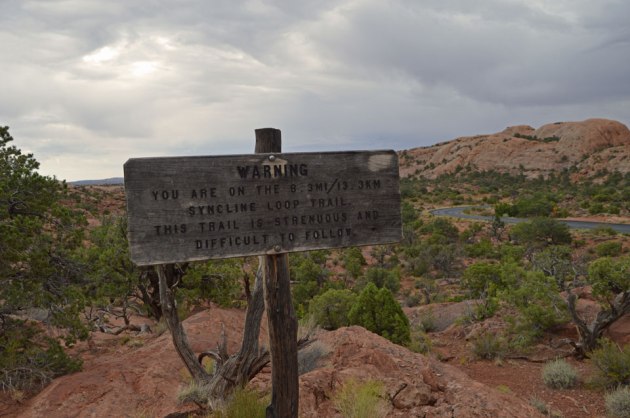 The trail weaved through the desert and stunted trees and slowly lost elevation until I couldn’t see the horizon. As in Arches National Park the previous day, I was uneasy about being in a wash with threatening clouds. But, it was obvious where rain had washed in the past and wouldn’t be hard to get above. I was also close to the highest point around, so it was not as if hundreds of square miles of surface water would be funneling in my direction if it did start to rain.

At 10:45 am I got to the start of Syncline Valley, where the wash cut through the steep outer wall of the crater. The rain sprinkled, but soon stopped, and that was as bad as it got. The sandstone walls of the crater were impressive, and around the corner the terrain abruptly changed. 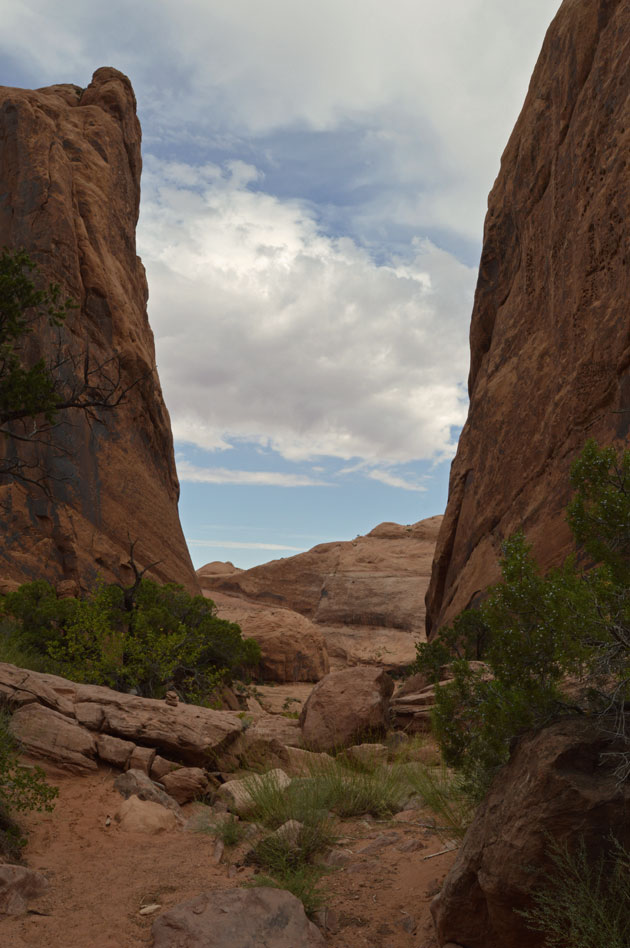 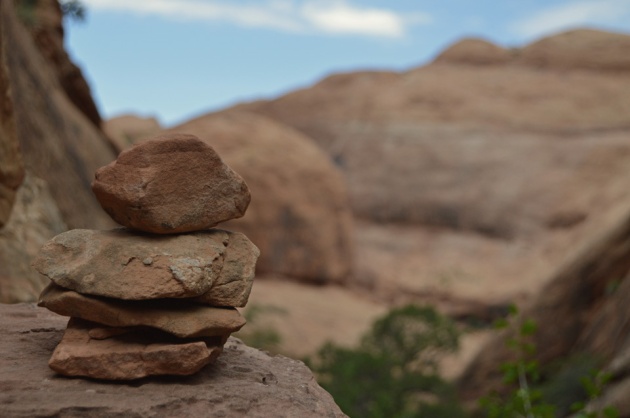 In the valley there was a savannah-like grassland before me. The walls of the valley were capped with dome formations and from weathered holes in the sandstone birds flew about and twittered nonstop. 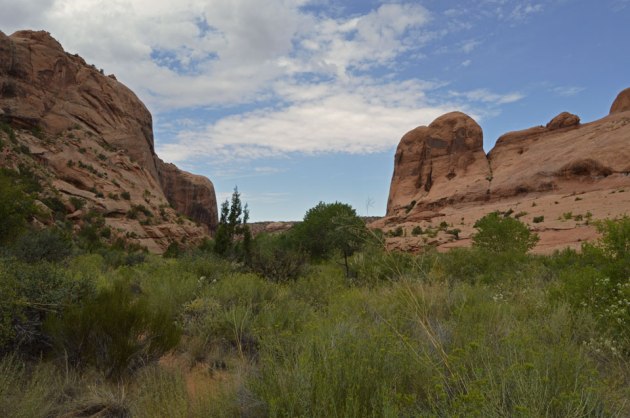 Grasslands in the valley

As I got deeper into the valley the vegetation grew thicker and I entered small forest of full-sized trees. 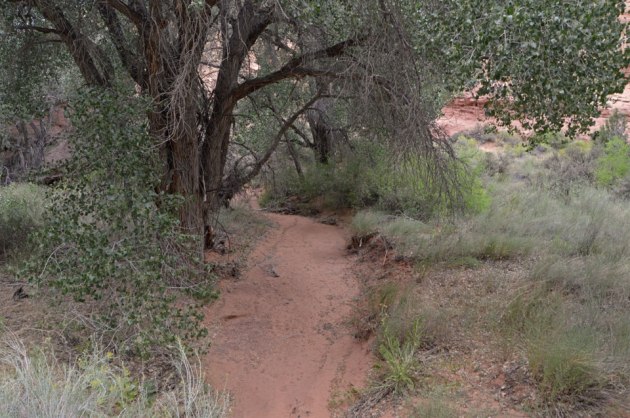 My pace slowed as I took in the surroundings, a verdant oasis protected from the scorching desert by the walls of a mysterious crater. I must’ve been near the mid-point of the loop as I saw a few small groups of people, the first since I started Syncline Loop.

The trail dropped toward a large puddle, the first water I had seen (but not drinkable), and just beyond it the ground dropped off. The trail skirted around the drop off and as I turned a corner I could see into Upheaval Canyon. The floor was hundreds of feet down, so it was unfathomable how the trail would get me there.

The trail entered a steep slide of car- and bus-sized boulders between which I had to clamber and pick my way. At one point I came to a small metal trail sign bolted to a rock, pointing the way to the difficult to follow trail. 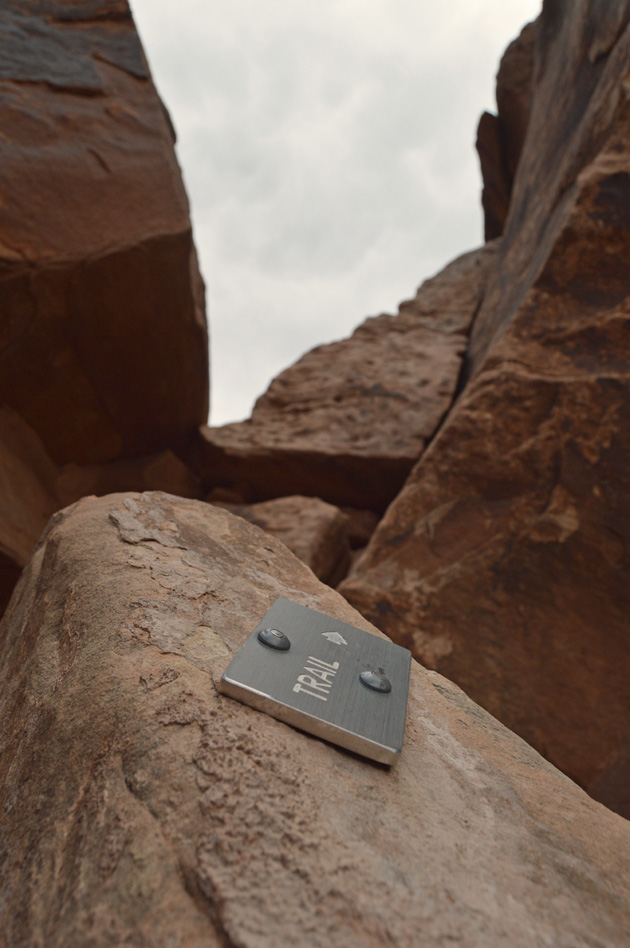 After climbing over and around a boulder twice as tall as me, I dropped down into its shadow and saw a cliff below me. For a second I thought I had gotten off the trail but then noticed cairns marking the route. 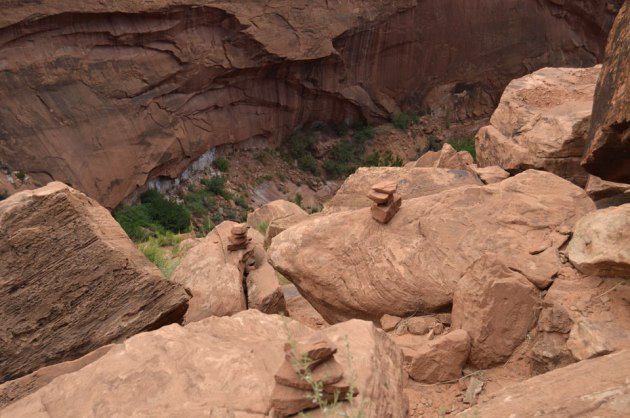 I pick my way down the boulders, being careful as there was a lot of fine sand and loose rocks. At the bottom of the canyon the trail crossed to the far side and the terrain became desert-like again. Looking back the way I came I was impressed that the trail was able to drop down the canyon wall. At the top, at what I thought was the large rock I had to climb over, I could see a group of 3 hikers following me. I could not pick out the trail though, just boulders.

I headed further into the canyon and started to notice what I thought were goat tracks and droppings. I kept an eye peeled for them but never noticed any. The hike continued to impress me. The canyon walls were dotted with spires, toppled rocks and other odd formations. One saddle-like shaped structure that I noticed was described with the geological term syncline, which is a fold in geological layers. Hence the name of the trail, Syncline Loop Trail. 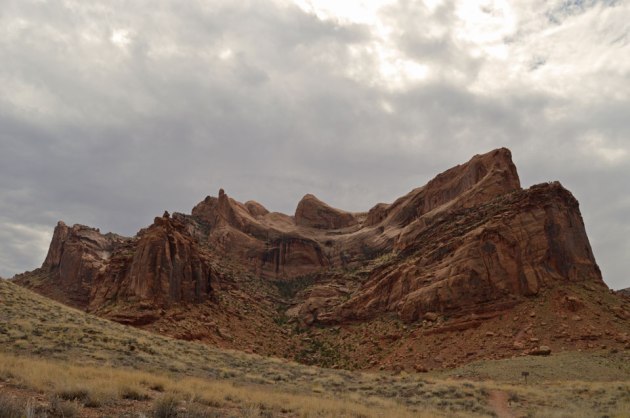 I came to the junction with the Upheaval Crater Spur Trail and followed it toward the heart of the crater. 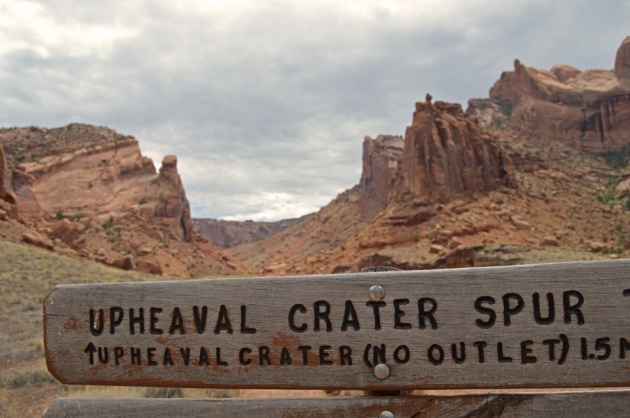 The trail stayed flat and followed a wash running out of the crater. As I got deeper into the crater the sandstone walls drew closer. The walls of the wash were slanted overhead, the tops looked crumbly and weak. I stayed to the middle of the wash as to not get crushed if a boulder decided to fall.

Before I got to the center of the crater the sun had come out and the walls of the wash started to bake me. At 12:30 pm I stopped at a large flat rock in the middle of the wash and made lunch. By the time I was done I was feeling exhausted from the heat and was thinking ahead to the steep climb out of the canyon. Rather than extend my exhaustion and hiking distance, and see the center of the crater, I turned back and headed out of the wash.

On the way out I noticed a boulder with holes worn out of it. People had stacked little stone cairns in some of the caves. It was an interesting sight. 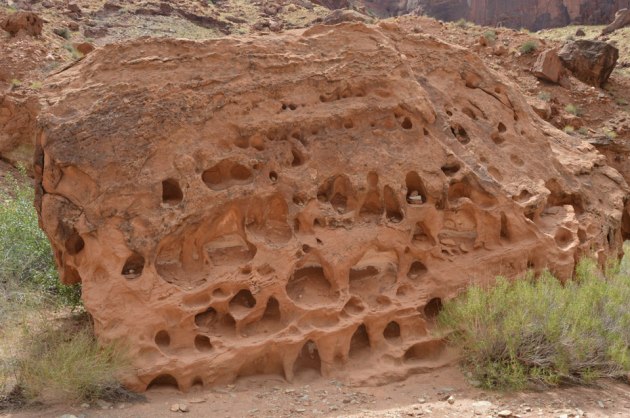 Back on the Syncline Loop Trail I passed a side trail to a hardened area that was the Upheaval backcountry campsite (no water). Beyond it I dropped further into the canyon before sweeping south and then east into another wash. It was 1:30 pm and incredibly hot by that time. Again I stayed in middle of wash as walls looked crumbly.

At the end of a wash the trail lead to another wall of the canyon. It was hard to pick the route out, and a little unnerving. But the path was well worn, so it wasn’t difficult to follow. The trail switched back and forth as it regained elevation, and I stopped often in the shade of boulders to rest and sip water.

Partway up the canyon wall I hit a level spot and noticed a small peak overlooking the canyon below. I scrambled up its sandstone side to get a better view. At the far end I could just pick out the Green River. 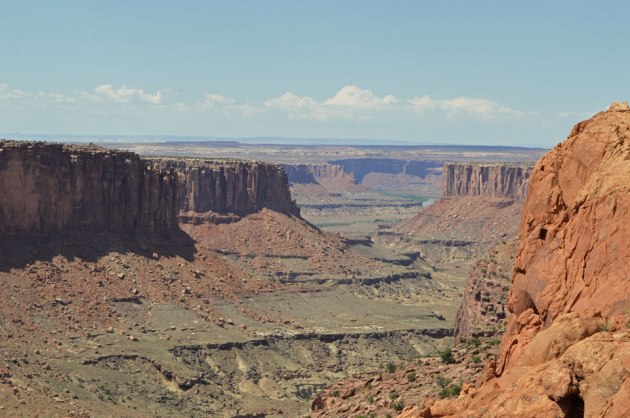 I continued to slog away at the ascent, eventually catching up to the group of three I had seen behind me earlier.  Back at about starting elevation I made my way slowly toward the intersection with Crater View Trail, arriving there 3:00 pm.

Although I was out of water and exhausted, I turned away from the now full parking lot and joined the crowds heading to the overlooks into the crater. In a few minutes I made it to the first overlook and peered into the crater. 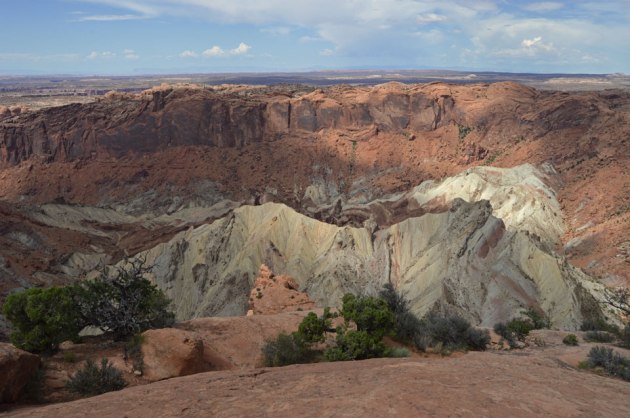 There was a sign at the overlook that described the crater and proposed the two theories for the crater’s creation. One was an eroded salt dome, the other an impact crater from a meteorite. Since the sign’s creation it had been confirmed, through the discovery of shock quartz, that the crater was created by impact.

I was back to my car by 3:20 pm, where I re-hydrated. I knew that heat, dryness and water would be an issue, but I underestimated the difficulty of downhiking first and doing all elevation at end of the hike. Back at the campground in Moab I showered, went to the grocery store and recovered for the rest of the day. The next day I would be returning to Salt Lake City, but not before getting in a couple more hikes.