My first big, multi-day hike was a three day Pemigewasset Loop in July 2013 with a great group of friends. I decided that I wanted to push myself a little and attempt the Pemi Loop in a single day. Or, since I started in the evening, in a 24-hour period. I would be doing the hike solo, and with just a hammock and emergency bivy if I was forced to stop.

Since I had hiked Franconia Ridge plenty, I decided to set out clockwise from Lincoln Woods. That way I would do Franconia Ridge at night and the Bonds during daylight. I also decided to stick just to the Loop, no side hikes to Galehead or West Bond (or the further but attainable North Twin and Zealand). 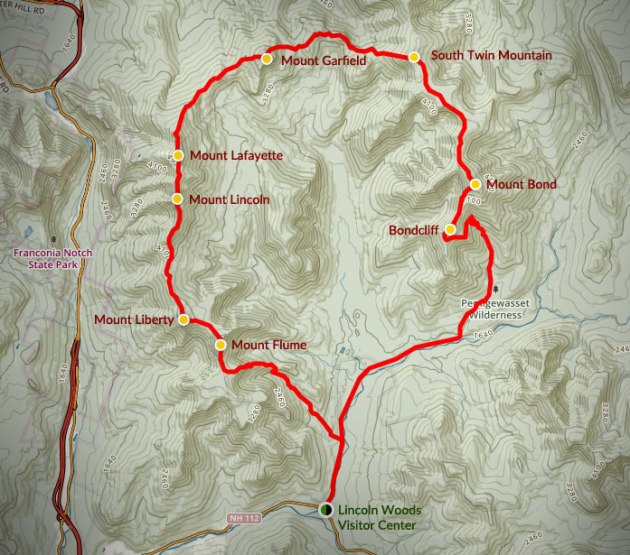 I got to Lincoln Woods Visitor Center at 6:10 pm. Since it was a Saturday in the summer the parking lot was congested, but it was late enough in the day that there were available spots. I headed up the ever monotonous Lincoln Woods Trail at a good pace since my pack was light and the trail was flat.

When I got high enough up Osseo Trail I got a glimpse of the Pemi Wilderness and realized that if I hustled I might catch sunset from the peak of Mount Flume. 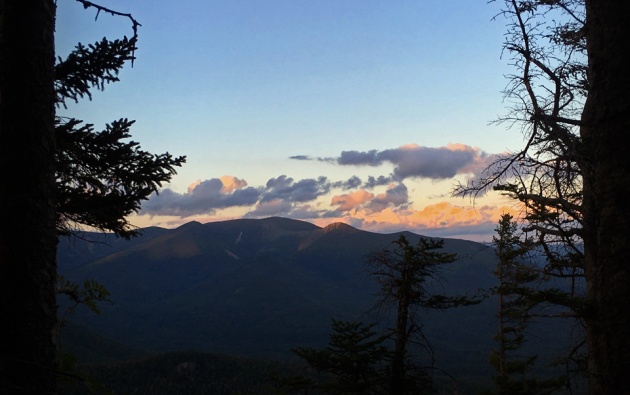 I continued to churn up Osseo Trail, risking being soaked in sweat and exhausted while crossing Franconia Ridge in the middle of the night. As the trees thinned near the summit I saw the last red rays of light go below the horizon. I got above the treeline at 8:15 pm. I just missed sunset but it was still beautiful. 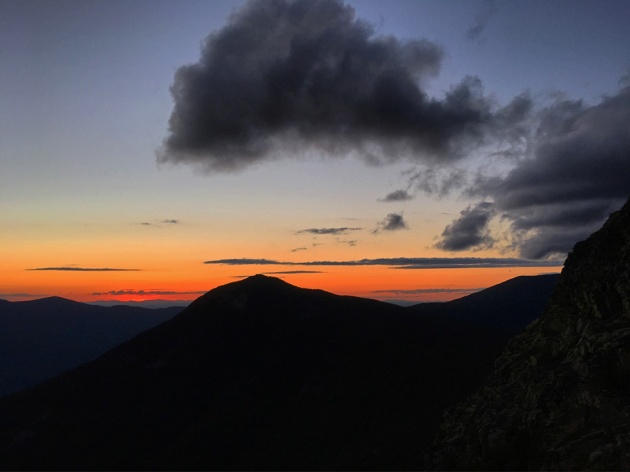 As I approached Mount Flume I noticed a young nude couple getting dressed. Once they had their small clothes on I finished hiking up to the summit and made my presence known, as to save them a little embarrassment. I didn’t ask, but I imagined they took a killer nude silhouette photo of sunset.

I continued to Mount Liberty and got there at 8:55 pm. There was not much to see, just the final dying rays of sunlight barely perceivable on the horizon. At 10:00 pm I made it to Little Haystack in time to watch the moon rise and eat dinner under the Milky Way.

The hike to Mount Lincoln took another thirty minutes and I was starting to feel the evening’s miles in my legs. To the north, beyond a cloud-shrouded Mount Lafayette I could see heat lightning, but the forecast was still clear for the mountains. Below me were city lights and the flickering sparks of campfires at Lafayette Place Campground. Even in the middle of the night I could perceive the enormousness of the mountains.

A little after 11:00 pm I hit the cloud line near Mount Lafayette summit. It was like a thick fog blowing in 20 mph winds. I felt a little uneasiness creep into my gut from the lack of visibility, but I knew these trails. I kept my eyes on where I was going, making sure to stay on course. My headlamp sparkled off drops of dew gathering on the ground foliage, as if the stars were settling in for the night.

I dropped down into the col between Mount Lafayette and Mount Garfield and started guessing when I’d hit Garfield Pond. My legs were shot and I was looking to take a few hours rest. At 1:10 am I pulled off the trail and hung my hammock. Based on the wind that was cutting through the trees I figured I’d passed the relative shelter of Garfield Pond. I crawled into my Bivy and into the hammock with all my layers on.

I got up at 4:00 am, cold but rested. I packed up and made the short hike to the summit of Mount Garfield at 5:05 am. I had greatly overshot Garfield Pond, I was only 10 minutes from the summit. I enjoyed my breakfast with a side of sunrise.

On the way down Mount Garfield I stopped at Garfield Tentsite to replenish my water. I made it to Galehead Hut at 7:30 am where folks were enjoying the morning sun’s warmth on the deck. The din of breakfast murmured through the repeatedly opening and closing door.

I continued along toward South Twin Mountain, grinding the grueling climb toward a cloud ceiling. I reached the summit at 8:00 am and quickly moved along, as the peak was swamped by clouds.

The hike over to Mount Guyot from South Twin Mountain was a pleasant one due to the lack of elevation. But by the time I was closing in on Mount Guyot my legs began to ache from the effort of the last half a day. I took a break at the hardened campsite just before the trail left the woods approaching Mount Guyot. A couple of groups of hikers went by as I rested.

I got to Mount Guyot at 9:20 am to one of my favorite views in the White Mountains. There was a worker building stone barriers along the trail near the summit cairn. I said hello and continued on toward the Bonds.

Pemi Wilderness from near Mount Guyot

After the reasonable climb past the Guyot Tentsite spur and the West Bond spur trails, I arrived at Mount Bond at 9:55 am for another of my favorite views. 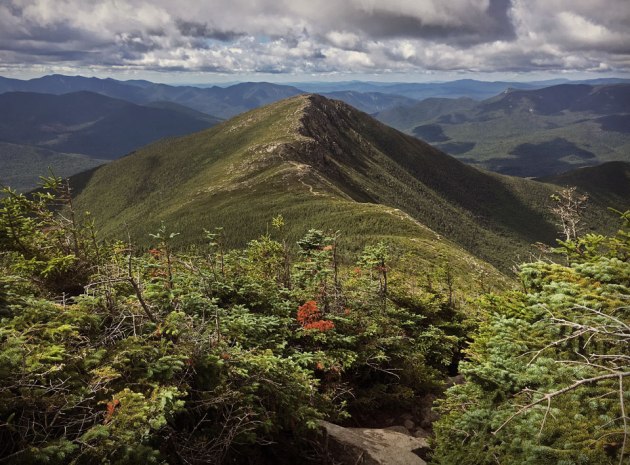 Looking down on Bondcliff

There were a few more hikers on the summit of Mount Bond. After taking in the view and remembering back to my first visit to Bond I continued on to my final peak, Bondcliff. I arrived there at 10:30 am and found it to be breezy and crowded, normal for it. A lady was nice enough to take a photo of me on the edge of Bondcliff, a required photo when visiting. After having a snack and resting my legs away from the crowds I started my final descent to the Lincoln Woods Visitor Center.

The hike down Bondcliff was quite pleasant. It started with a short cliff downclimb and then the trail managed the elevation loss by following long switchbacks through the forest. After a few river crossing, which were low and dry that time of year, the trail flattened out and started the monotonous 4.5 mile route back to the parking lot.

When I crossed the bridge near Franconia Falls I laid down next to the trail with my head resting on my pack. I didn’t care what day hikers passing me thought, I was exhausted.

I made my way back to my car by series of short power hikes and rests. I got to it at 2:20 pm, and was in an excruciating amount of pain. The last time I had felt like that was when I ran a marathon in 2012. It was worth it though. I had completed the Pemi Loop in a 24-hour period, 20 hours and 10 minutes to be exact. It was far from the 6:06 fastest known time, but I’m still proud of it. Sometime in the future I’ll have to return to do it in a single day and get my time down. 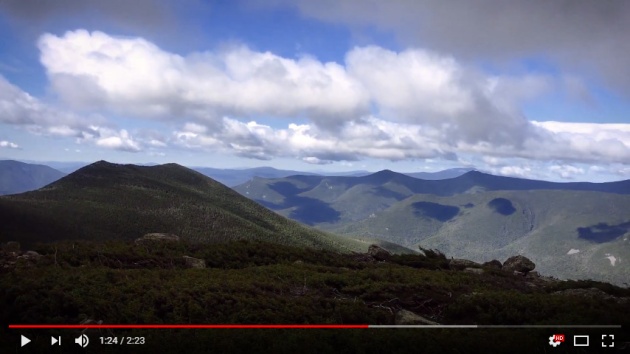