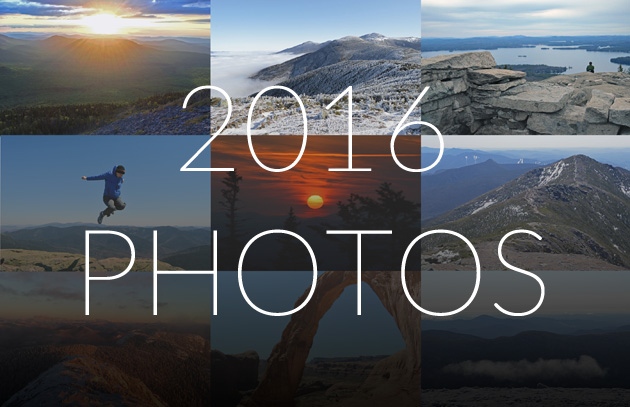 Here is a list of my favorite photos from 2016. Last year I posted about my 10 favorite Instagram photos of 2015 because I had photo storage issues. This year I made a return to carrying my DSLR on hikes and captured some shots that do a good job of summing up my year of wandering. A bunch of these are from hikes I haven’t blogged about yet, so look forward to reading those posts in early 2017.

#10 – Great Range Traverse, Adirondacks
A couple of friends and I spent three days traversing the High Range in the Adirondacks in mid-September. This photo was taken of me on the northern edge of The Gothics just before the cable climb down to the col between it and Saddleback Mountain. The large slide in the background is Basin Mountain. These three mountains, despite their intense ups and downs, were my favorite part of the trip.

On the edge of Gothics

#9 – Sunrise on Mount Abraham, Maine
A friend and I camped out on Mount Abraham and then got up to catch sunrise from the talus strewn summit. After breakfast we bushwhacked to Middle Abraham and returned to our car as cloudy weather started to roll in. The skies were glories and we didn’t see another soul the whole morning. 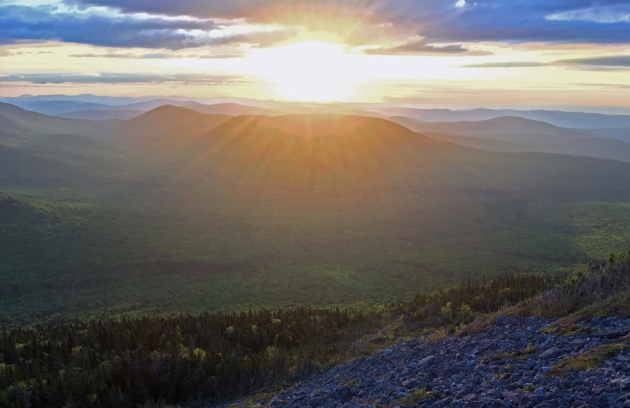 #8 – Icy Southern Presidentials
During the first week of Spring I borrowed a friend’s crampons and attacked the icy peaks of the southern Presidentials solo. I left my car at the Cog Railway parking lot, rode my bike to Crawford Path and then hiked a loop that included Mount Washington. It was a beautiful day of blue skies and treacherous ice that I won’t soon forget. I couldn’t get over the sight of the frosty mountain peaks floating in a sea of undercast clouds. 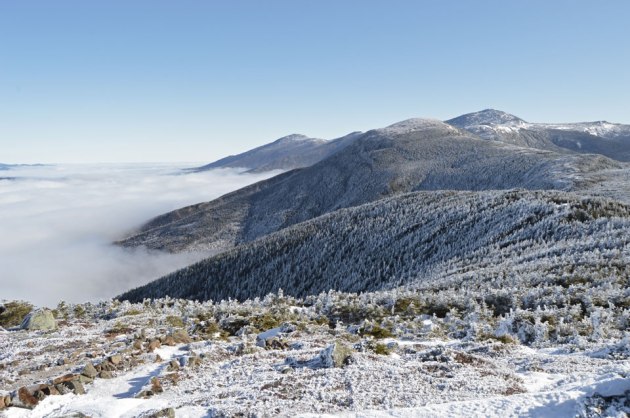 Undercast on the Presidential Range

#7 – Sunrise on Mount Major
Later that morning I met up with a couple of friends to hike Mount Cube, but first I hiked Mount Major in the dark so that I could catch sunrise from the summit. The sunrise turned out to be a dud, but I enjoyed the relative peace of Mount Major on a blustery Spring morning. I caught this photo of another hiker looking over Lake Winnipesaukee from within the old stone shelter on the summit.

Waiting for sunrise on Mount Major

#6 – Franconia Ridge in Spring
After hiking Artist’s Bluff with my boys, I convinced my older son to return with me the following weekend to traverse Franconia Ridge. It was an extremely icy day where several people needed to be rescued as evening fell, but we were prepared and had a memorable day. I was glad to be able to share such an amazing hike with my son. I love how small the hikers seem in the foreground, giving scale to the massive ridge.

#5 – Lonely cloud over Dry River Wilderness
One of my favorite peaks is Mount Eisenhower. It is the most prominent peak in the southern Presidentials and unique from most other mountains in New Hampshire due to it’s round and bald top (I even prefer its original name, Mount Pleasant). While doing a loop of the southern Presidentials I took this photo of a lone cloud floating over the Dry River Wilderness with the summit of Mount Isolation glimmering beyond it. 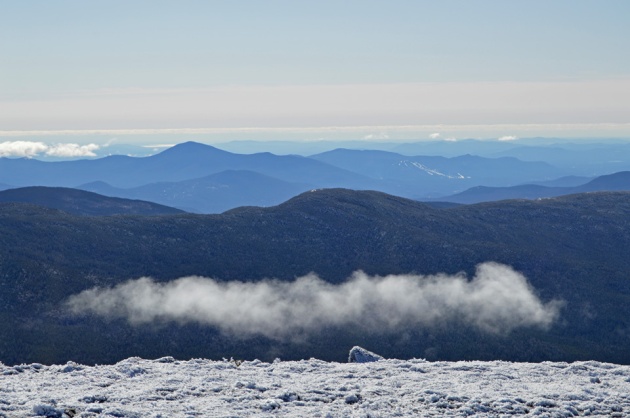 That view from Mount Eisenhower

#4 – Corona Arch outside of Moab, Utah
In August I went to a conference in Salt Lake City and then took a long weekend to drive down to Moab and go to Arches National Park and Canyonlands National Park during the National Park Service’s centennial. On my way back to the airport I stopped at Corona Arch, one of the largest arches in Utah and typically overlooked because it is located outside of the national parks. I could not get over how huge the arch was and how beautiful the surrounding desert was.

Basking in the desert sun below Corona Arch

#3 – Sunrise from Mount Chocorua
On my younger son’s birthday in January I got up while it was still dark to climb Mount Chocorua for sunrise. I spent a long time in the frigid morning capturing the sun rise and spread its alpenglow over the surrounding mountains. Both of my cameras froze and shut off, but I put my camera under my jacket and then was able to take this photo as Mount Washington broke free from the clouds that had been covering it. I even got back to our hotel in North Conway in time to have breakfast with the family.

Alpenglow over the White Mountains

#2 – “Jump as high as Baxter Peak”
During our spring hike of the Franconia Ridge loop, my older son and I had Mount Lafayette to ourselves. I had never been up there on a clear day and as we were taking in the surrounding mountains I told him that Lafayette was just a few feet shorter than Baxter Peak in Maine. He tried to jump as high as Baxter Peak and I happened to capture this photo just as his foot perched on the horizon near Mount Washington. 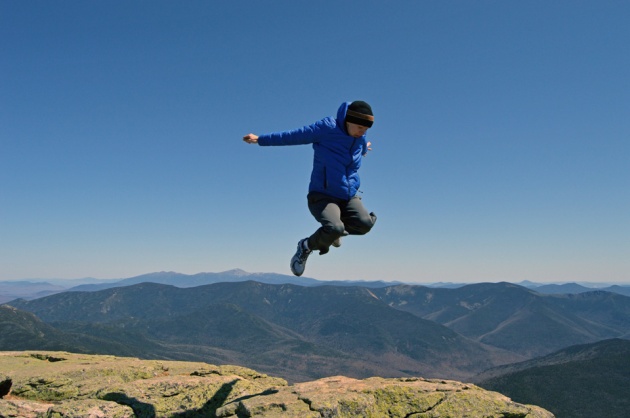 #1 – Sunrise from Mount Crocker
Sunrise was definitely a theme of mine this year, and one of the most spectacular sunrises I caught from the summit of South Crocker in Maine. I drove up to the mountain in the middle of the night and caught a few hours of rest in my hammock before hiking to the summit for sunrise. I zoomed in and took this photo shortly after the sun rose above the horizon.

In the past I was torn about carrying my DSLR with me when going for a hike. It’s easy to get into the mentality of hiking as light as possible because at the end of the day you’re less tired. But, I’ve gained so much enjoyment out of taking high quality photos while in the mountains that it is not such a struggle any more. I have to be really tight on space or the weather calling for lots of rain for me to leave the camera at home anymore.