In August 2016 I travelled to Salt Lake City, Utah, for a conference. The following weekend was the National Park Service’s centennial and the entrance fees to all parks in the country were free. I rented a car and drove down to Moab for the weekend to visit Arches and Canyonlands National Parks.

I didn’t want to do the most popular spots as I would be visiting the parks in 2017 with my family. l also wanted to target the more primitive and long trails. So, when I arrived in Arches I enjoyed the amazing drive to the far end of the park to Devil’s Garden.

For this hike I took the main trail toward Landscape Arch and followed the primitive trail loop from there. I also took side trails to Private Arch and Dark Angel. The hike was about 6.5 miles with little elevation change. The terrain was loose sand through desert and washes with a few scrambles over slick rock and over sandstone fins (future arches, they say). The hike took me 3.5 hours and was very hot and dry. 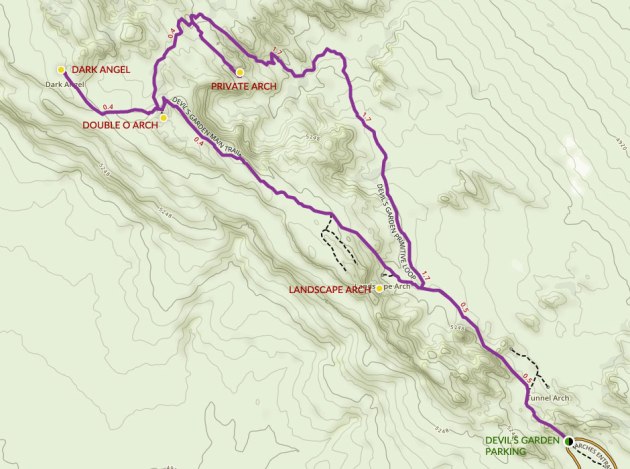 After enjoying the gorgeous drive through Arches National Park, one of my favorite drives, I arrived at Devil’s Garden parking lot late in the morning.

Even though Devil’s Garden is on the far side of the park, it is the access point to Landscape Arch and the only campground in the park is nearby, so it is always crowded. The campground was closed for repairs but the parking lot was still nearly full. I had to drive around the loop twice to find a spot. The temperature was in the 80s and some clouds hinted at the chance of rain.

The main trail in Devil’s Garden left the parking lot and passed between some massive sandstone fins that provided some of the only real shade on the trail. The trail here was wide, sidewalk-like, and filled with people milling about. 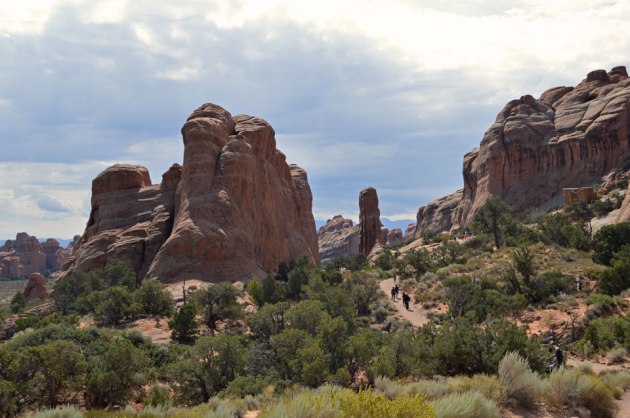 Looking back at start of trail

I may have been a little out of place with my overnight backpack, but it was what I used to check my overnight gear on the plane and hadn’t had space for a day pack. That was all right, I hustled past the crowds anyway. When I got to the junction with the primitive trail I took it, leaving everyone behind. 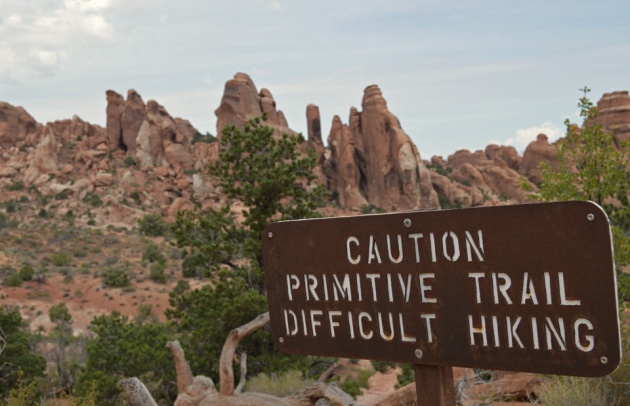 The trail was loose sand and headed toward the open desert, providing a view of the distant La Sal Mountains.

Across the fine, red sand of the trail I saw lines zig-zagging back and forth with tiny footprints on either side. These paths typically lead to small holes in the side of dunes. It wasn’t long before I noticed their makers, little brown and tan lizards that were very common to the area. 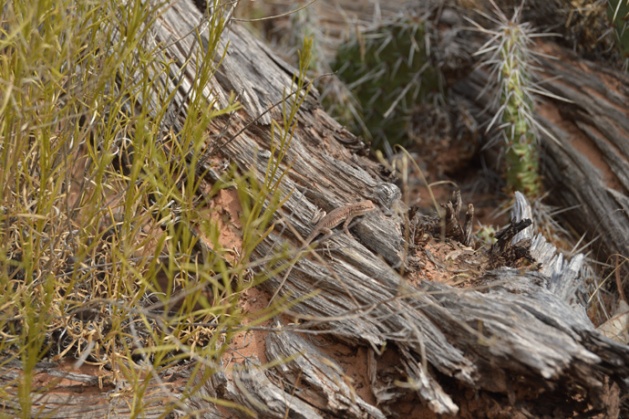 One of many lizards along the trail

After a mile or so the trail cut back to the sandstone fins that contained the park’s arches, and followed a wash. Needless to say, with darkening skies above, I was more than a bit concerned about my location. I saw my first hiker since I hit the primitive trail while I was stopped for water and contemplating the skies. “Looks like rain,” he said as he passed.

I decided I was more than halfway up the wash, so I would be out of it quicker if I continued on. A few minutes later a couple ran past me (trail running, not running from danger) and then I passed a family as they assessed a bit of sloped slickrock that was easier to cross than it looked. Luckily the rain held off for all of us, I never felt or sw a drop.

I took the spur trail for Private Arch and after a short hike along the top of some fins I got to the arch at noon. There were a few small groups checking out the arch, which was relatively small. The hikers were able to pass through the arch to get different views of it. I instead climbed up the nearby slickrock to have a snack and water away from the others.

People checking out the far side of Private Arch

After returning from Private Arch I followed the primitive trail to Double O Arch, but took the spur trail to Dark Angel before checking it out. Dark Angel was a tall, dark sandstone spire that stood alone in the desert. It had a somewhat ominous human shape about it. During the hike to Dark Angel I started to feel hot and parched, so when I got to it at 12:30 pm I sat in a small bit of shade to drink the rest of my water. 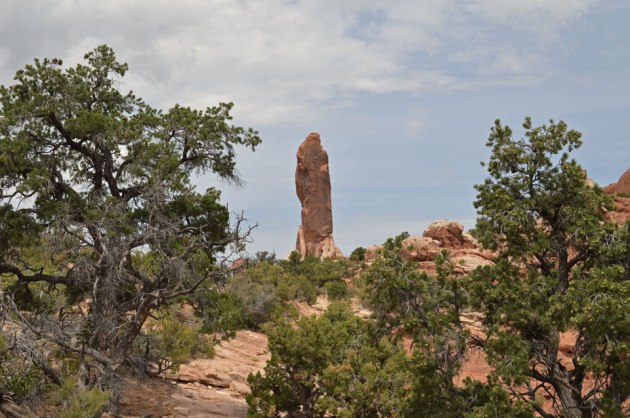 An older gentleman who I had passed moments before walked over and we struck up a conversation. He was a retired rocket engineer who was spending his retirement traveling the country seeing our national parks. I told him about my family’s plans to spend a month doing the same the next year. After a good 20 minutes I wished him well and returned the way I had come.

I passed by Double O Arch but didn’t take the short path up to it as I wanted to get back to my car for lunch and more water. I did see a boy sitting in the bottom half of Double O, despite the many signs that ask you not to touch, walk on, or sit in the arches. 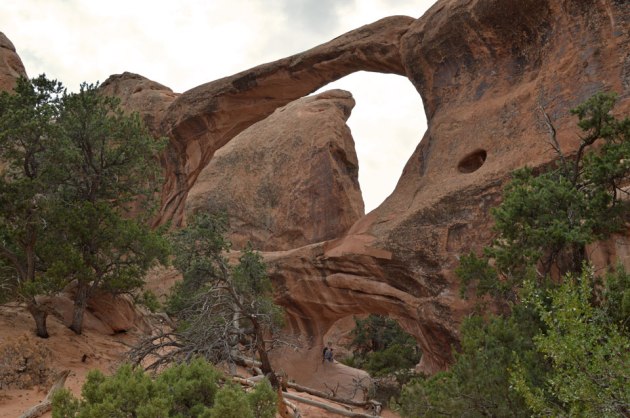 After Double O and heading back toward the main trail there was a little climb onto a giant fin. The trail followed the spine of the fin and one side was a huge drop to the desert floor below. Off in the distance I could make out what looked like a dark cave but was in fact Black Arch. Apparently there was a short trail to the arch from earlier on in the primitive trail, but it is not marked so I didn’t notice it. 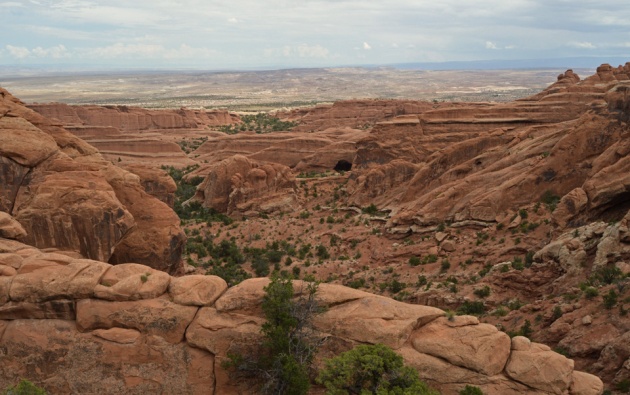 Black Arch from the top of a tall sandstone fin

After climbing down the sandstone fin I returned to the main trail and continued on to Landscape Arch. When I got to it I didn’t take the side trail closer to it because I promised my wife I wouldn’t do any of the popular sites. But, I couldn’t help seeing it from the main trail and snapping a few photos.

Shortly after Landscape Arch I returned to the intersection where I had started the primitive trail and retraced my way back to the parking lot. Along the way I saw someone with the swag shirt from the conference I had attended. I’m glad I wasn’t wearing mine, that would have been awkward.

I got back to my car at 2:00 pm and drove to the other side of the parking lot to make lunch at a picnic area. I enjoyed a cooked meal on my JetBoil while sitting in the shade of a juniper tree. After lunch I drove to a campground just inside Moab to set up my site for the next two days.