In late April I took my older son on one of the classic hikes in New Hampshire, a traverse of the Franconia Ridge Trail. The weekend prior I went camping with both my boys and we hiked Bald Mountain and Artists Bluff. From that vantage point we had a great view of Lafayette. It looked like most of the snow and ice had melted from the ridge, so I had asked my son if he’d like to hike it the next weekend. He said he did.

We got up early (for a teenager) and drove to Franconia Notch State Park, getting there at about 8:30 am. Getting out of the car was a practice of tempering ourselves against the frigid temperature and gusts of wind from the northwest. With it being a clear day, the parking lot at the Falling Waters Trail head was fairly packed with like-minded hikers. We set off up the trail to get our blood pumping and fend off the cold penetrating our layers.

We got to the first water crossing and it didn’t look too bad. I had been a little concerned with the crossings as it was early spring, during the winter melt. We decided to hike up Falling Waters and down Old Bridal Path because I didn’t want to be coming down at the end of the day and find a gnarly crossing preventing us from getting to the car. I’d much rather us turn around and find something else to do early in the hike. But, halfway across the river we realized that the wet rocks were in fact rocks covered with a very thing coating of black ice. The super frictionless surface made our chosen route impossible. We turned around, found higher and drier ground and got across without further issue.

A cascade on the Falling Waters Trail

As we got to the higher water crossings the sun crested the ridge and melted the black ice, so the remaining crossings were less hazardous. After the last of the waterfalls we switchbacked into the woods and started making elevation. At about 3400′ we encountered a monorail of old snow. After a few hundred feet of hopping from rock to rock we stopped and put on our microspikes.

As we continued up the trail the packed old snow became blue ice and more spread out. By the time we got to the junction with the side trail for Shining Rock the ice was all encompassing and probably a foot thick. It was all we could do to stand in place while eating a snack, so I didn’t even host the thought of going out to Shining Rock.

We slowly made our way up the trail and when we hit treeline the ice disappeared. My son got his first good look at the cliffs of Cannon Mountain and Lonesome Lake across the notch. To the north the rugged line of Franconia Ridge cut across the startlingly blue sky. At 11:00 am we made it to Little Haystack.

There were quite a few people on the peak and the wind made the temperature feel a lot colder than it was. After taking some photos we got in the lee of the peak and had a snack in the warm sun.

We lingered for a bit, letting the other people continue on until we had the summit to ourselves. Once the other groups were far enough ahead we set off across the bony backbone of Franconia.

Every time I hike Franconia Ridge I am reminded of the beginning of the Two Towers movie when Aragorn, Legolas and Gimli pursue the Uruk-hai over the great mountain ranges of Middle Earth in order to rescue the kidnapped Merry and Pippin. Luckily, we had the luxury of hiking leisurely across the ridge and soak in the views (and didn’t have to worry about our friends being eaten by Orcs).

Bondcliff from the Franconia Ridge Trail

We got to Mount Lincoln at 12:05 pm and stopped for lunch. We had the summit to ourselves and for some bizarre reason we were out of the wind that plagued Little Haystack.

Looking back at Franconia Ridge Trail from Mount Lincoln

We continued on and pushed up the climb to Lafayette. We stopped often to peer at the distant mountains or look down a particularly aggressive drop to the notch below. At 12:45 pm we made it to the top of Lafayette and again we were greeted by no wind and no people. 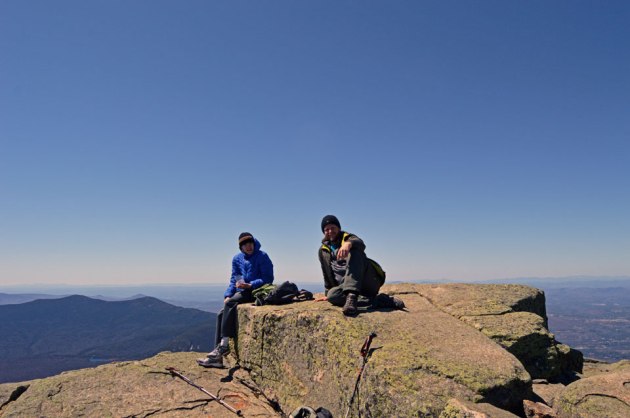 Mount Lafayette summit all to ourselves

After a snack and a long break we started our descent. A few minutes in I misplaced my foot and fell forward on the trail. I tore my pant leg open and got a long abrasion up my shin. I found it ironic that we had clambered over so much ice and I tumbled on dry rock. 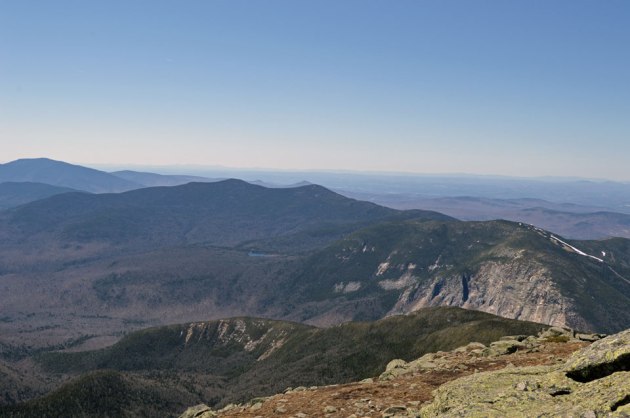 Looking down at Old Bridal Path and Franconia Notch

When we hit the treeline midway between Lafayette and Greenleaf Hut we got into the ice again, and what a coworker of mine would call the goofers. Earlier, as we headed up Falling Waters Trail the hikers we saw were prepared for the ice and unpredictable weather. As we headed down Greenleaf Trail, the people coming up were way over their heads.

The first couple we came across were from Canada and looked prepared for foul weather, but not for the ice. They asked how much further until the ice ended and whether they should turn around. I told them that they were almost to the end of the ice, so they might as well push on, but I let them know that Falling Waters Trail was even icier and steeper so they were better off to turn around at Lafayette and come back down Greenleaf Trail.

We passed a few more groups, some had decent traction and others inferior traction made for walking on snowy sidewalks, not icy trails. Then as we got close to Greenleaf Hut we came across a young couple with Massachusetts accents. They were wearing cotton and sneakers and were climbing between the trees off the trail in order to traverse the ice. I let them know they had a lot of ice ahead of them and that it was even worse going down Falling Waters trail. I suggested that they turn around, especially considering that it was already afternoon. I can only suppose that they were the hypothermic couple rescued from the top of Falling Waters Trail the following morning (see link in references).

At 2:00 pm we got a short break from the ice as we arrived at Greenleaf Hut.

Looking up at Franconia Ridge from Greenleaf Hut

Although there was no ice in the immediate area of the hut, the Goofers continued to arrive. There was another young couple in cotton smoking cigarettes on the porch and an entire family in street clothes eating lunch in the grass beside the “Please do not step on grass” sign. I of course took these opportunities to talk to my son about being prepared and hiking responsibly.

We headed down the Old Bridal Path to make our final descent to the car. Shortly after the hut the ice picked up again. We passed a lady leading a group holding her hand against the trunk of a tree a foot and a half above the ice, telling her group how bad the ice had been two weeks prior. After we scrambled down a slide and out onto the bald ridge of the Old Bridal Path, the ice finally dissipated and we only had to deal with mud.

The views continued as we made our way down the ridge and then we dropped into the forest for the final leg of the hike. We arrived back at our car at 3:45 pm a bit more than seven hours after we started.

I was glad to be able to bring my son on this hike for his first time. It is definitely a New England classic, and the weather was just about perfect for hiking above treeline in April. This hike of Franconia Ridge continued theme from previous hikes of people not being prepared and getting in over their heads. I’m not sure why this inflicts Franconia particularly. Possibly because of it being easily accessed from I-93 or maybe just because it is such a beautiful hike. Regardless, it is not an easy hike and just like the Presidentials, the exposure is severe and the weather is unpredictable. It is not a good first hike. But, thanks to the goofers I was able to show my son the responsibility of being prepared.

Look deep into nature, and then you will understand everything better.
—Albert Einstein

Video of Franconia Loop 2016 hike
Music from Free Music Archive: “No.02” by Room for a Ghost