We started on the Signal Ridge Trail off Sawyer River Road . At the junction with Carrigain Notch Trail we took it. There was no official path to Vose Spur, but there was a pretty good herd path to the summit from Carrigain Notch Trail. Soon after passing Bushwhack Boulder we took the herd path on the left, stepping over a large birch log, and followed it to the summit. We then continued our bushwhack down the western side to the talus strewn col between Vose Spur and East Carrigain. The bushwhack continued up East Carrigain and then followed the ridge to the fire tower atop Mount Carrigain. We looped back to our car by taking Signal Ridge Trail back to the trailhead.

The hike was about 10 miles with 3600′ elevation gain and took us under eight hours to complete.

With only one 4000 Footer remaining in each of Maine, New Hampshire and Vermont (and all three hikes planned), the goal with this hike was to get a New England Hundred Highest, Vose Spur.

A friend and I left home early and arrived at Sawyer River Road parking at 4:50 am. We headed up Signal Ridge Trail until it met the Carrigain Notch Trail. We took Carrigain Notch Trail to what is sometimes called Bushwhack Boulder. It was merely a medium-sized boulder that the trail passed shortly before the bushwhack to Vose Spur. The bushwhack was marked be a large birch tree trunk on the left side of the trail. We started the bushwhack a short time after 6:00 am and up to that point the trail had been nearly flat and a breeze.

The bushwhack followed a herd path for a while and was quite easy to follow. We lost the path in some mossy strewn boulders but found it again soon after. At times the going was steep and required climbing over large boulders. The path abruptly exited the woods and onto a talus field a shortly before the summit. This allowed for our first views of the day toward Carrigain Notch and Mount Lowell.

Beyond the talus field the herd path continued to the summit. We arrived at 7:30 am to find a canister and sign marking the small clearing of a summit. There was a folding chair hanging from a tree which I suppose would be useful if one needed a break.

We stopped briefly for a snack and I signed the log book.

After our break we crashed into the thick of things, heading west toward Mount Carrigain. The western side of Vose Spur was thickly populated with trees that caught and scratched us as we hike/tumbled down the to col below. Just beyond the col was a remote and quiet talus field that had spectacular views to the south and north.

The climb from the col to East Carrigain was steep and difficult to say the least. At times it felt like we were climbing up a moss covered cliff. Sometimes we used the upper branches of trees rooted far below to crest boulders and ledges. Once we made it to East Carrigain the going was a bit easier. We followed a slight herd path along the ridge with moderate gain to Mount Carrigain. 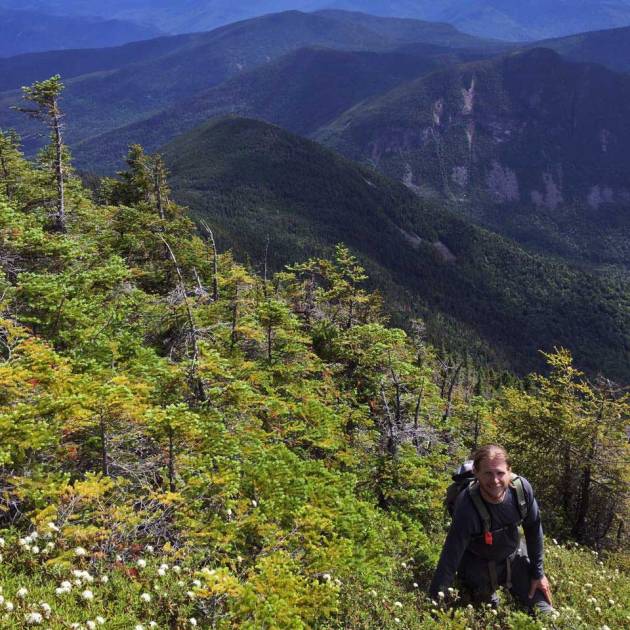 Closing in on Carrigain

As we approached the summit the trees gave way to some isolated clearings. Under foot were fragrant shrubs with white flowers baking in the summer heat. Above was crisp blue sky accentuated by brilliant white clouds.

A beautiful vista we found on the way to Carrigain

To the south we could make out one of my favorite ridge lines in the White Mountains, Signal Ridge. I looked forward to crossing it in a bit, but first to the summit.

Looking toward Signal Ridge from the shoulder of Carrigain

We reached the fire tower on the summit of Mount Carrigain at 9:45 am and had it to ourselves for half an hour. The views were phenomenal and after taking them in we laid in the sun to dry our sweaty clothes. We ate an early lunch and got ready to go when another hiker showed up, affording him the same solitude we had enjoyed.

Hiking on an actual trail seemed a luxury after the scramble we had endured up the eastern face of Carrigain. We made good progress down to Signal Ridge and across it, stopping just long enough to look over and imagine where our route had been in the trees of Vose Spur and East Carrigain.

We passed all sorts of hikers as we made our way down Signal Ridge Trail and back to our car. As with many of my hikes we started earlier than the crowds which allowed us to have the summit to ourselves and be heading out as they were still tackling the first half of their day.

As remembered from the first time I hiked Mount Carrigain in July 2013, the Signal Ridge Trail was long, moderately steep and unrelenting despite its switchbacks. But, the last few miles (which were a repeat from the morning) were flat and quick and we made it back to our car a little after noon.

I wouldn’t say that checking off Vose Spur was the highlight of this hike, but I definitely enjoyed the experience of bushwhacking from it to Mount Carrigain (despite how difficult it was). The little-experienced vistas that we discovered while following the ridge from East Carrigain to Mount Carrigain were amazing, and as always the view from the fire tower was spectacular.

There is pleasure in the pathless woods, there is rapture in the lonely shore, there is society where none intrudes, by the deep sea, and music in its roar; I love not Man the less, but Nature more.
—Lord Byron 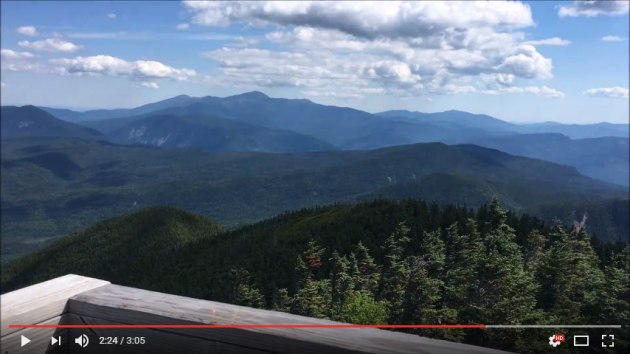