A couple of friends and I took advantage of mild winter conditions to bag one of the more difficult winter 4000 Footers, a bushwhack to the Peak above Owls Head. The Peak above Owls Head is considered one of the more difficult hikes for several reasons: it is one of the more isolated peaks, by trail it is a 19 mile round-trip hike, there is no official trail to the summit of the peak and there are many water crossings which can be dangerous when the waters are high. To top this off, the best way to get to the peak in the winter is to do two bushwhacks known as the Black Pond Bushwhack and the Brutus Bushwhack.

Three of us drove up to the mountains Friday evening after work and camped at Hancock Campground, which was open year-round and across the street from the start of the hike. On the drive over Kancamagus Pass we pulled over to watch a moose munching leaves on the side of the road. Once at the campsite and after some food by the fire we turned in for an early morning start.

The fourth of our group showed up at our campsite at 6:50 am and we were setting off from the parking lot at Lincoln Woods Visitor Center by 7:30 am.

As I have mentioned in the past, I am not fond of hiking the Lincoln Woods Trail. Unfortunately, it starts some of my favorite hikes in the White Mountains National Forest. The old railroad trestles were laid out at a distance that disagreed with my natural stride. Fortunately, it was not an issue with the trail this time as it was covered with snow. So that, along with the occasional snowman built on the side of the trail made it a more pleasant stroll than usual.

When we reached the junction with the Black Pond Trail we took it and were at Black Pond by 9:00 am. Though it was overcast there were some views toward the foothills leading up to the Bonds over the top of the pond.

Owl’s Head from near Black Pond

The weekend prior there was a trail report from a group 10 from the Appalachian Mountain Club doing the Black Pond and Brutus Bushwhacks to the Peak above Owls Head. Since there had been no weather in the intermediate time, we knew that there would be an obvious path to follow through the woods. We found said path on the western side of Black Pond and followed it north and slightly uphill.

This was a good thing as for many of us it was our first time bushwhacking in the winter. Over time, as I’ve hiked more peaks and trails, I’ve become more and more intrigued with bushwhacking. I have done some orienteering in the past and there was a period of time where I competed in adventure races with my brother which often included compass work. But, aside from that time in the Emigrant Wilderness when we had to navigate out of the wilderness by map and compass in a blizzard, I don’t have a lot of experience navigating by compass. Following a much trodden path through the woods didn’t add much experience to compass navigation, but it did give me a better feel for travelling off path.

We hit the end of the Black Pond Bushwhack shortly after the Lincoln Brook Trail crossed the Lincoln Brook for the last time, perfect in terms of the purpose of the bushwhack (which is to shorten the hike and avoid water crossings). While hiking up the Lincoln Brook Trail we were passed by a trail runner. I found out later that he was going for the fastest known time (FKT) summit of the Peak above Owls Head. Turns out his name was Mike Robinson and he successfully got the FKT at 3:16:36. He also holds many of the New Hampshire 4000 Footer FKTs. 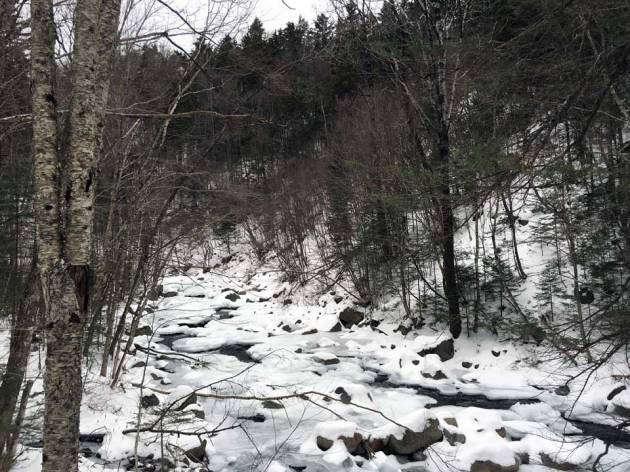 Once we were on the Lincoln Brook Trail we followed it west and then northwest around the southern bulge of Owls Head. 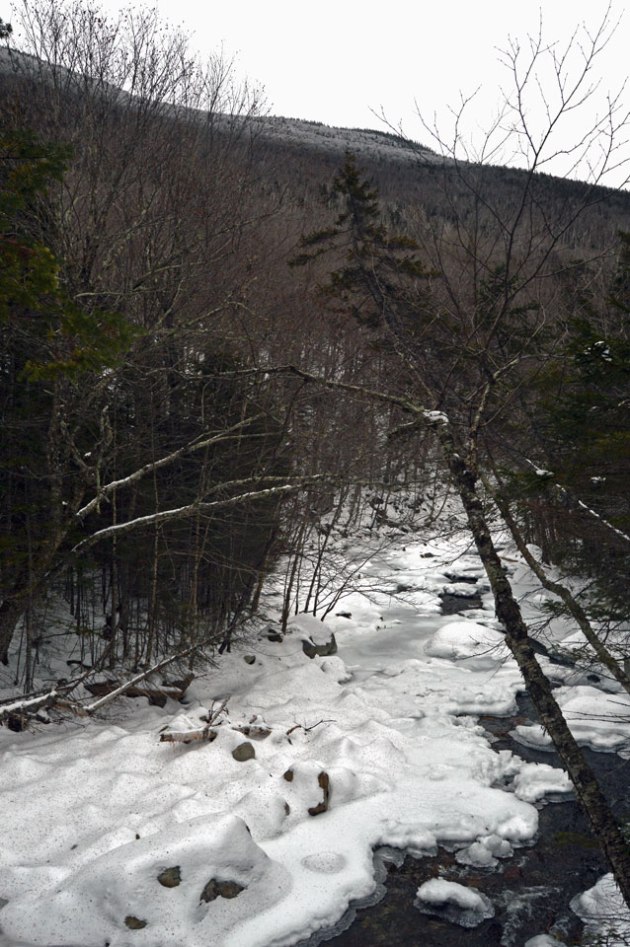 For the most part the trail followed the Lincoln Brook on a bank ten feet above the water. The trail was icy in sections and there were a bunch of small water crossings, but we were wearing microspikes so no one slipped. 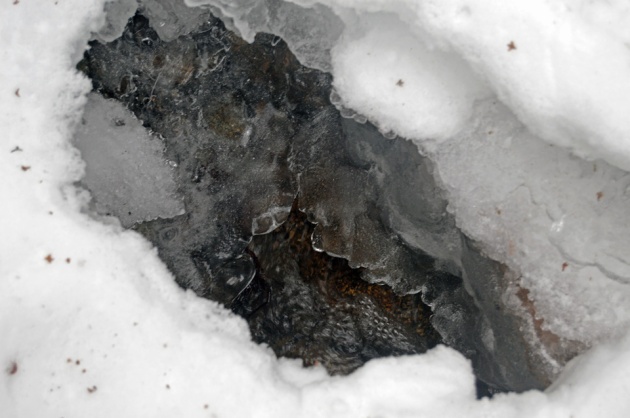 Through the ice bridge

Around 11:00 am we crossed Lincoln Brook and found the start of the Brutus Bushwhack. The bushwhack was named after a Newfoundland dog owned by Kevin Rooney. In 2004 Brutus was the first dog to complete the winter New Hampshire 4000 Footers and the following winter completed all 48 in one winter season. Brutus only balked at a few trails and the slide on Owls Head Trail in winter was one of them. Brutus found the route that is now the most common way to ascend the Peak above Owls Head in the winter. 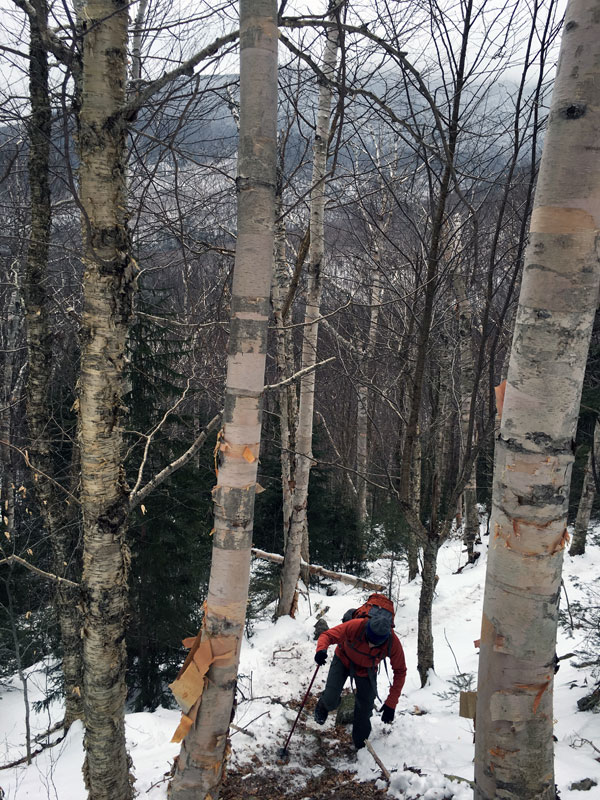 The bushwhack started up the south face of the ridge prior to Owls Head Trail and shortly after crossing Lincoln Brook. After a short climb it followed an old logging road easterly until it entered hardwood forest. Just before hitting the valley it climbed sharply up the mountain, never entering the valley that can be seen on topo maps. As the route hit the top of the steep section it veered west again. At a point near a large boulder there were two ways to approach the bushwhack: one headed directly toward the summit, the other continued west until it met up with the Owls Head Trail above the slide and followed it to the summit. We headed directly toward the peak.

I counted 12 people while going up and down Brutus Bushwhack that day. A lot of others were taking advantage of the mild weather and easy to follow bushwhack. One complained that it was the most difficult Brutus he had done, and while I admit that it was a haul up the steep part next to the valley, one can’t really complain when all of the work is done for you.

We reached the peak above Owls Head at noon and were greeted by “franco.” He was a very friendly fellow who frequents New England Trail Conditions and like us had read the report of 10 AMC hikers breaking out the bushwhacks the previous weekend. 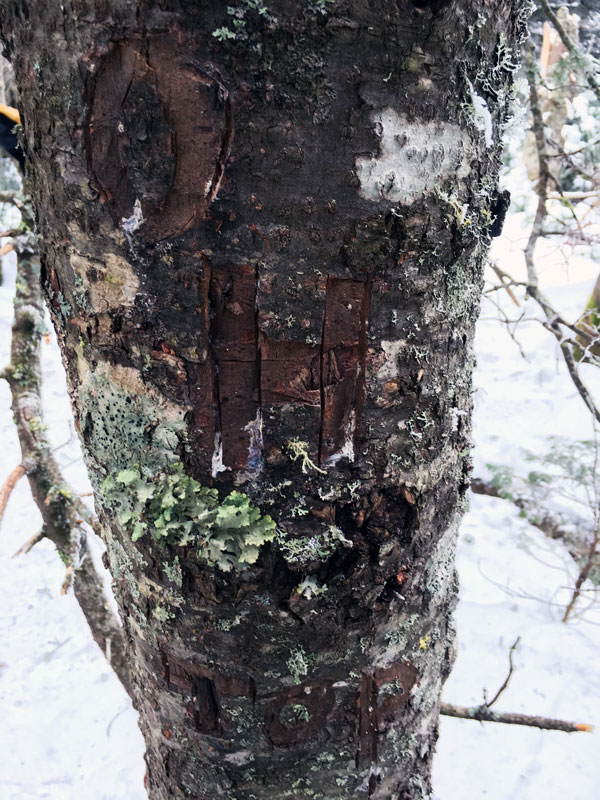 At the summit cairn

We talked with franco on the summit for a while and had lunch. At 1:00 pm we got ready to head back down.

The hike back down Brutus Bushwhack was more of a run and controlled fall down Owls Head. On the hike back the trail and ice bridges were getting soft due to the warm temperature, but they held for us. 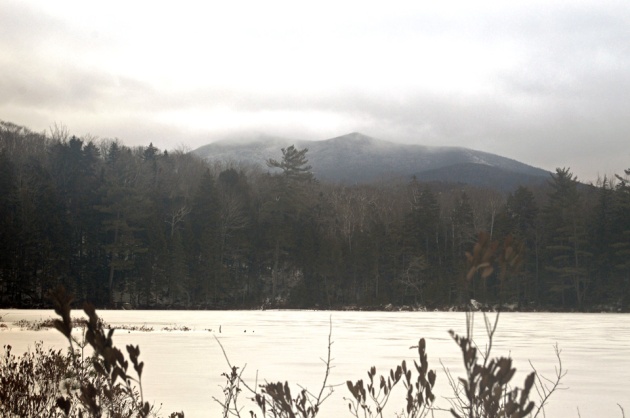 The foot of the Bonds over Black Pond

Aside from a spot on the Black Pond Bushwhack when one of our party went up to his knees in mud, the hike back was quick and uneventful. One of our party even ran the entire section of Lincoln Woods Trail, either inspired by Mike Robinson doing the FKT or just excited to be out on the trails in winter.

We got to the parking lot at 4:15 pm and drove up to the Woodstock Inn Station & Brewery to refuel and warm up. We went up to the taproom where we could sit by the fire and drink coffee and beer.

Refueling by the fire at Woodstock Inn Brewery Taproom

This was my 47th of the New Hampshire 48 4000 Footers, only Mount Moosilauke remained which I am also saving for my last New England 4000 Footer. This was an easy attempt of one of the hardest winter New Hampshire 48. Though we had no real views aside from the Owls Head and the foothills of the Bonds from Black Pond it was still a memorable hike and a first winter bushwhack for most of us.

My suggestion for others wanting to do this hike in winter but are uneasy about the bushwhacks: keep an eye on trail reports for large groups doing Owls Head and no snowfall between then and when you go. Make sure you have compass and map and know how to use them, and be prepared to have to camp out overnight. Also realize that unless the trail you are following is super packed down from a lot of use, the people you’re following might not know where they’re going.

I see my path, but I don’t know where it leads. Not knowing where I’m going is what inspires me to travel it.
—Rosalia de Castro 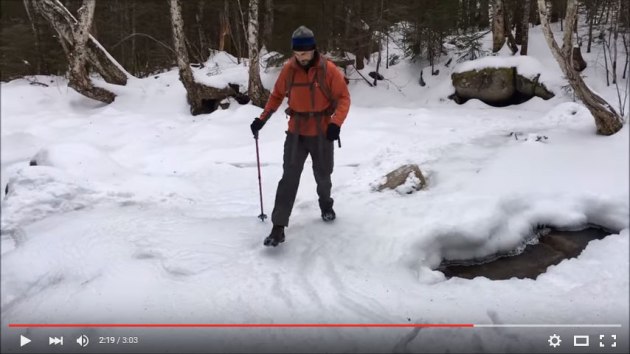 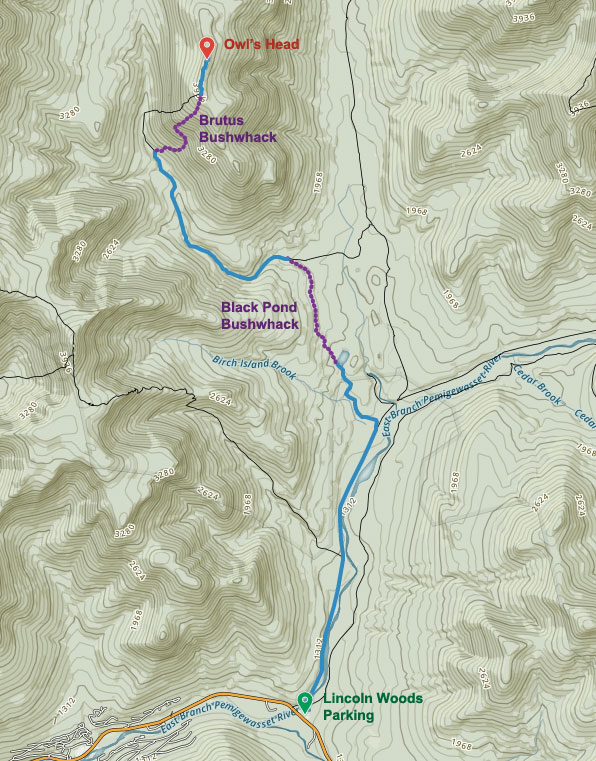