For the first hike of the new year a friend of mine and I took the opportunity that some mild weather provided to grab a couple winter 4000 Footers. We considered different peaks for a while and landed on doing a traverse over Mount Flume and Mount Liberty from Lincoln Woods Visitor Center to Liberty Spring Trail. We considered the idea of doing Lincoln and Lafayette as well, but the forecast had some weather threatening in the afternoon and that was not a place we wanted to be stuck in bad weather.

After planting my car at Liberty Spring parking lot we shot back to Lincoln Woods and arrived at 8:00 am. It was overcast and there were light flurries, but the temperature was in the 20s and there was no wind at ground level. We headed up one of my least favorite trails, Lincoln Woods Trail, with microspikes in our pack. The trail reports were looking good with a nice solid pack on most trails. We considered whether or not to carry snowshoes as the conditions of Osseo Trail were unknown, but it had been long enough since the last snowfall that someone had probably already broken out the trail.

The hike up Lincoln Woods Trail was uneventful as always and we soon made Osseo Trail and started to climb. At a switchback there was a view into the  Pemigewasset Wilderness and we stopped to check out Owl’s Head crushed below an oppressive load of clouds.

I remembered this location from the first time I hiked Osseo Trail, at the start of the Pemi Loop I did with 5 other friends in 2013. It was where we caught our first sight of the Bonds across the valley and got a feel for what an epic hike the Pemi Loop was. The clouds were too thick on this day to see across the Pemigewasset valley.

Owl’s Head just below the clouds

We continued up the trail and just before it turned north to make the final ascent to Mount Flume we hit the vista looking toward Whaleback Mountain. 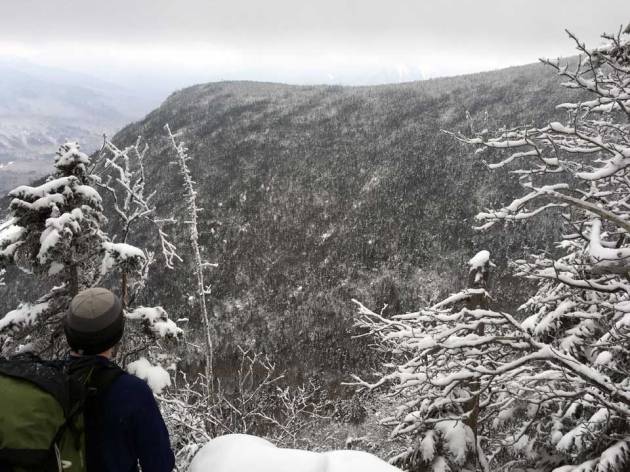 As we approached the summit of Flume we broke out of the forest in a world of grays. The clouds were thick, preventing any views. But the trees were heavy with snow and frost, giving them an otherworldly feel.

The world in shades of gray

We paused just below the summit to take some photos and followed the narrow trail past the cliffs that lead up to the summit. Though the traction on the trail was not great the snow pack was sturdy enough that we didn’t feel we needed our microspikes.

Despite the increased cold due to the higher elevation and not being protected from the wind I kept stopping to take photos of the trees. They took on peculiar shapes somewhere between cauliflower and angel wings. 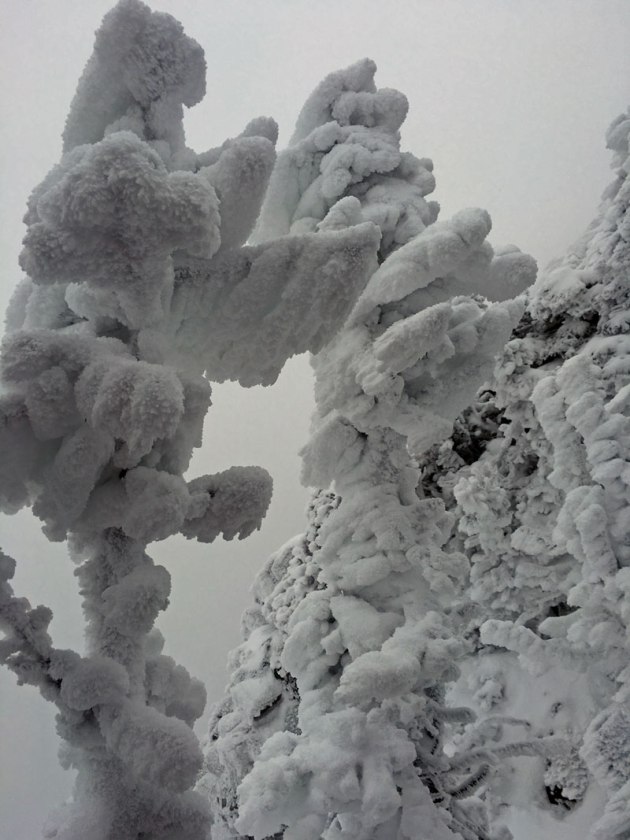 We made it to the summit of Mount Flume at 11:00 am and stopped for a quick snack. I couldn’t help but see Dr. Seuss illustrations in the snow-covered krumholtz. 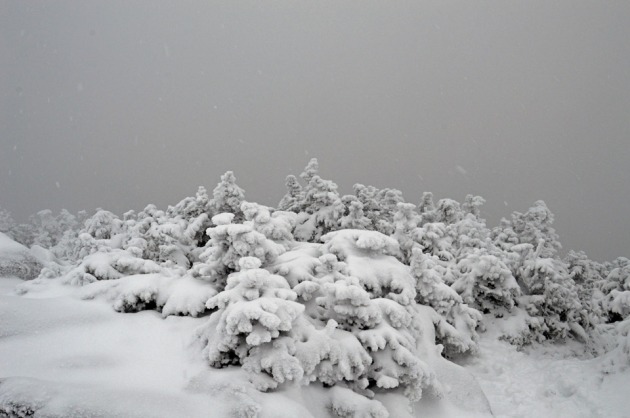 Since there was not a lot to see and we quickly got cold while standing still we moved on toward Mount Liberty. The trail dipped between the two peaks and reentered the forest. There was a magical quality to the narrow path needling between snow-ladened spruce trees and the over-sized snow flakes falling around us. It was this section of trail that stuck with me long after the hike, and was exactly what I hope to repeat with future winter hikes while trudging between peaks.

The summit of Mount Liberty was much like that of Mount Flume, but a little more exposed to the wind and elements. We arrived at 11:45 am and didn’t stay long before heading down the Franconia Ridge Trail toward the junction with Liberty Spring Trail. 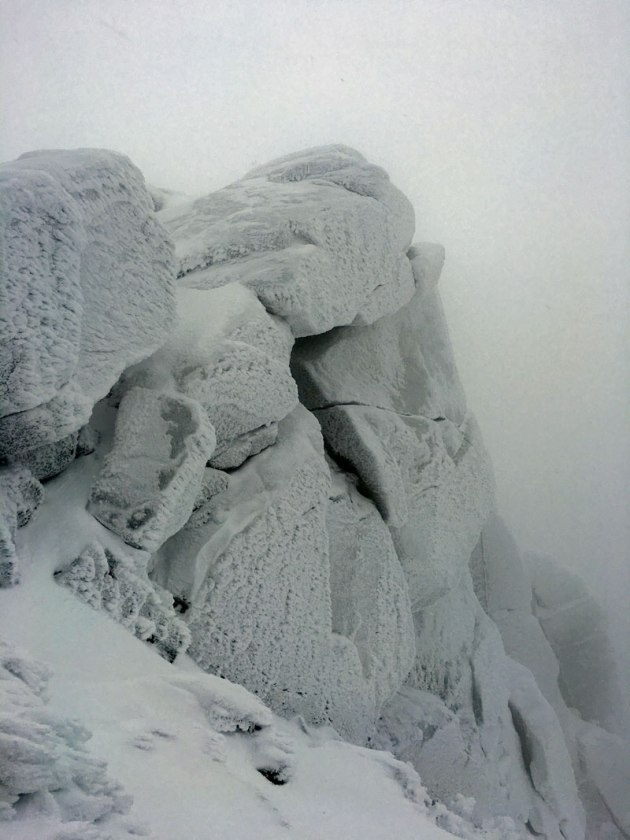 Just after the summit we encounter our first two people of the hike. When we got to trail sign at the junction with Liberty Spring Trail there was also a group of three that were coming from Mount Lafayette and Mount Lincoln. Since it was so early (just after noon) and the snow was not as bad as forecasted, we briefly considered traversing Franconia Ridge. We decided that it wasn’t a good idea to change our plans without letting anyone know, and the ridge was very exposed. The weather could certainly turn worse without warning. Plus, our exit vehicle was at the bottom Liberty Spring Trail, not Old Bridle Path. 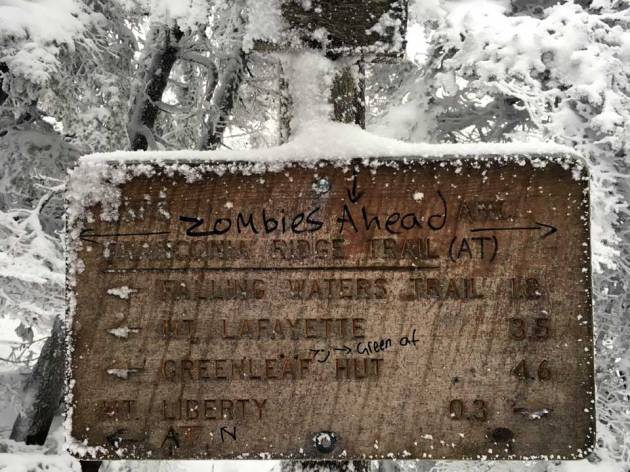 Wet headed down Liberty Spring Trail which after losing some elevation became muddy and slick. I briefly considered throwing on the microspikes but slowed my pace instead. After the first mile or two the trail leveled out and the descent became easy. After the junction with Flume Slide Trail we hit the Franconia Notch bike path and jumped onto Whitehouse Trail and completed the hike back to my waiting car at 1:45 pm.

To me this was an ideal winter New Hampshire 4000 Footer hike. There was plenty of snow but the trail was nicely packed so we didn’t have the extra weight and bulkiness of snowshoes. The weather was mild and although there was some wind up top, it wasn’t ridiculous. I guess it would have been nice to have had some views, but I hardly noticed that they were missing because the snow-covered trees were so wild.

I wonder if the snow loves the trees and fields, that it kisses them so gently? And then it covers them up snug, you know, with a white quilt; and perhaps it says “Go to sleep, darlings, till the summer comes again.”
—Lewis Carroll 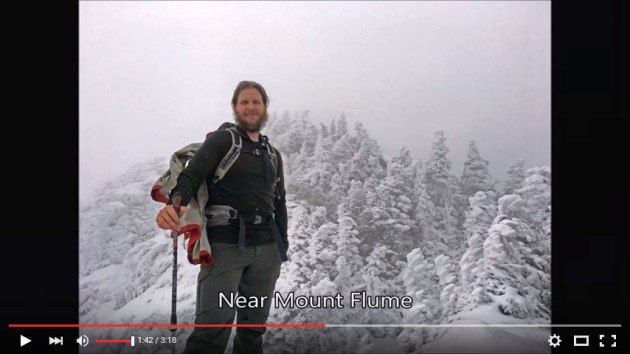