We moved off the island in July and one of the things I was looking forward to in living on the mainland was having more flexibility for going on hikes. On a mild and clear December day I decided to go on a sunrise hike of Mount Jackson. I got up at 1:30 am, made some coffee and hit the road.

I got to the parking lot across from Elephant Head Rock at 4:10 am. It was clear, there was a slight breeze and the temperature was in the high teens/low twenties. I brought my larger pack with me as I was unsure of the snow conditions up top, though I suspected that only microspikes would be needed. I also carried my camera’s tripod and many layers as I knew I would be stationary for a while taking photos on the exposed summit.

I headed up the trail, which was well broken out and easy to follow in the dark. I had hiked in the dark several times before when long days during multi-day hikes extended into the evening. Also, I had done a full moon hike of Mount Adams in the summer. But this was my first solo hike in the dark so I was glad that the trail was easy to follow. Occasionally I could see a sliver of moon through the trees, leading me up the trail .

I hesitated at a stream crossing as the boulders were covered with ice and the far side was icy ledge. As I pushed off quickly to produce enough momentum to get up and over the slick ledge my back foot slipped and plunged into the freezing stream. Fortunately, I was wearing my waterproof boots and I quickly caught my balance and retreated from the stream. My second attempt was more graceful and I continued up the trail without further hesitation.

About a quarter of a mile from the summit the trail became significantly steeper and I stopped to put on my microspikes. I had been on Mount Jackson in 2013 when I did the Presidential Traverse and knew that the Jackson branch of the Webster-Jackson Trail descended steeply over ledge near the summit. I knew this would be all ice and wanted to be prepared for it.

The final climb was steep and icy as expected, but I hurried up as my excitement grew. I reached the summit at 6:05 am and was greeted by the moon and stars and the glittering lights of Fabyan to the north. I was amazed at the lack of wind and the mild temperatures and when I crested the icy crown of Jackson I swore out loud at the blood-red horizon to the east. 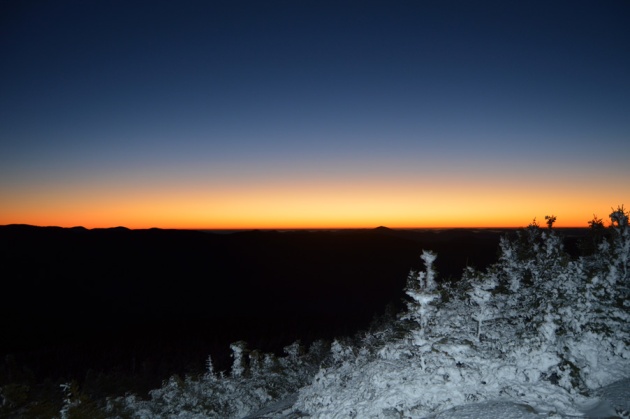 I dropped my pack and threw on a few layers for added warmth and topped it with my windproof layer. I set up phone for time-lapse video and positioned my DSLR’s tripod for capturing sunrise. As the sky grew lighter I wandered around, took photos and set the timed shutter release so I could pose with some of my favorite mountains.

As the sun began to rise, a breeze picked up and I had to take breaks from taking photos to warm my hands. When I had a snack a couple of Whiskey Jacks visited me and I was able to photograph one in the orange rays of sunrise.

After I had enjoyed the summit to myself for almost an hour and I half I started breaking down my equipment. As soon as I stopped the timelapse video on my phone it shutoff due to temperature. Luckily I did not lose the video. I warmed the freezing metal brick against my stomach and was able to take a panorama before heading down at 7:25 am.

The descent in the snow was quick and a half-fall, half-jog; the way I like to descend. At the same spot where I had stopped to put on my microspike I remove most of my layers.

In an hour I had done most of the descent and stopped at Bugle Cliff to check out the view.

15 minutes later, at 8:45 am, I carefully climbed over the ice forehead of Elephant Rock to look down on Route 302 and my car parked below. As I watched several cars pulled into the parking lot. I struck a stunning pose for them just as the brilliant sun crested above Mount Webster behind me (I doubt they noticed).

At 9:00 am I stepped out of the forest and crossed the road to my car. There were a couple of groups preparing to hike up and we exchanged a few words about the trail conditions. If only they had known what an amazing morning it was, they would have no doubt shown up at 4:00 am as well. The clear and mild conditions, and superb sunrise catapulted Mount Jackson to near the top of my list of favorite hikes and favorite mountains. 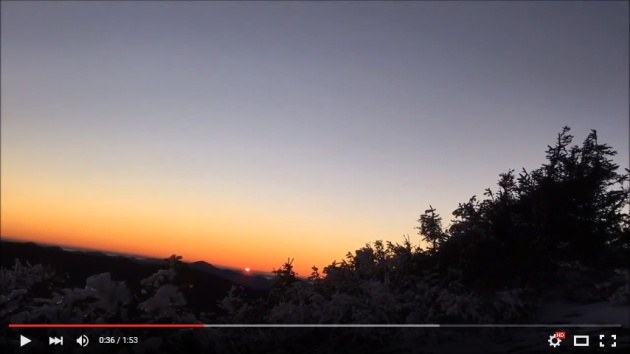