On Black Friday I followed suit with REI and opted outside rather than flocking to the mall like a normal American person. Although I have a weakness for hiking gear, books and electronics, I try to follow a minimalist approach to my life; gathering experiences rather than stuff. When I heard that REI was closing their doors on Black Friday so all their employees could spend the day outside, it aligned with my ideals and I joined them.

Tecumseh sits at the bottom of the New England 4000 Footer list at 4003′ feet and is the peak looming over Waterville Valley Ski Resort. I had been putting the hike off for those reasons as well as the drive to it took me across the lowlands of Maine and New Hampshire rather than through the White Mountains. But, with the number of peaks remaining on my 4000 Footer list dwindling and the fact that it was going to be cloudy, it seemed like a good day to final hike it.

I got to Waterville Ski Resort at 7:30 am and found the weather to be mild, in the 40s but mostly cloudy. I saw what I though were several other hikers walking up the parking lot, so I parked near them and followed. I soon realized that they were walking toward the slopes and must work at the resort. The slopes were all brown grass, they couldn’t possibly be skiers.

Waterville Valley and Tecumseh in the clouds

After a little hunting around I found the start of the trail on the north side of the parking area; the complete opposite side from where I parked. The trail started easy following the Tecumseh Brook through hardwood forest. After crossing the brook a few times and moving into evergreen forest, a short spur trail lead out to a view down a ski slope.

Above the view the trail became steeper. The climb was unrelenting but there were well-crafted stone steps to aid with the climb. I reached the top of the ridge, entered the clouds and any hope for views dissipated. From a little distance away I could make out voices carrying through the forest. I assumed it must be people from the ski resort working on lifts or snow machines in preparation of the resort opening once the snow flew.

I reached the summit at 9:00 am. It was a rocky ledge in the forest with a cairn on top. It was one of those peaks that wouldn’t have a view except someone took the liberty of felling some trees to make one. Not the best practice, but hopefully on a return hike the sky will be clear so I can report on whether the view was worth the effort.

After a quick snack I headed back the way I came and hiked to the end of Sosman Trail. After hiking over a few forested and rocky knolls I got there at 9:30 am and was greeted by a radio tower and more voices coming from the forest. 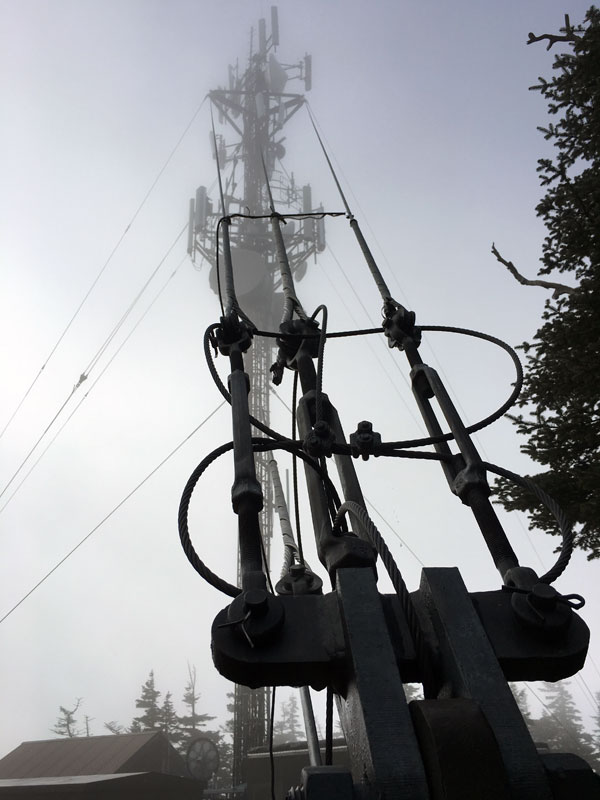 I followed the voices, expecting to come out of the trees overlooking a ski lift under construction. To my surprise I found a functioning ski lift in the clouds, complete with manufactured snow and skiers. It was a magical, dreamy place. 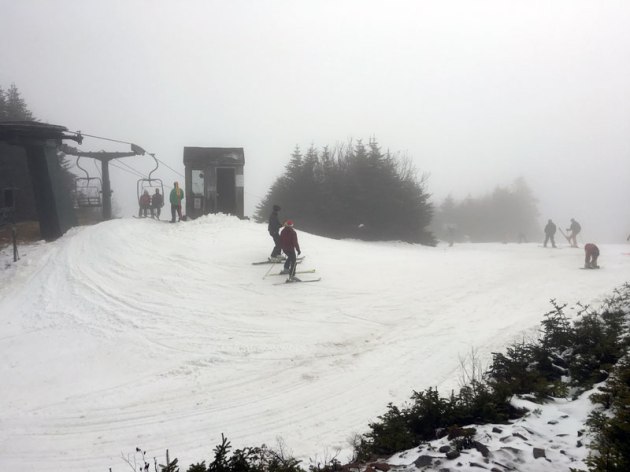 One ski lift and slope was open

After ogling the people skiing by for a few minutes I started my retreat down the mountain. Going down I saw fellow wanders opting outside rather than partaking in Black Friday rituals. All told I passed 20 people and 3 dogs; a contrast to seeing nobody up to that point. That’s why I left home in the dark and got to the trailhead at sunup.

At 10:35 am I made it back at parking lot just as the sun started to break through the clouds. No doubt those hikers would have some views in the afternoon, but I enjoyed the peace and quite of having the mountain and trails to myself. It was far preferable to fighting crowds over ultra HD TVs, PS4s, Furbies and Tickle-me Elmos.

It’s about feeling free, unbounded, shedding the distractions and barriers of our civilization—not bringing them with us.
—Ryel Kestenbaum