I recently headed to Vermont for a long weekend to visit my brother and we went for a hike on Saturday morning. Last year we hiked Mount Abraham, Mount Ellen and Camels Hump when we hiked the Monroe Skyline and hiked Mount Mansfield the day of my brother’s wedding. That left Mount Killington as my final New England 4000 Footer in Vermont. It was my goal to hike Killington, but soon realized that the 1:40 drive each direction from my brother’s house would take us both away from our families for a good portion of the weekend. Instead, my brother suggested Mount Hunger, a nearby 3500 footer with a great view of Mansfield and with as big of a climb as Killington.

We got up before sunrise, had some coffee and then headed down to Waterbury, a short drive down I-89 from Burlington. After turning onto the historic Route 100 and driving past The Alchemist’s cannery and Ben & Jerry’s, we took a right and headed toward the Worcester mountain range. We found the turnoff that AllTrails claimed to be the trailhead but only found a private road with a handmade sign stating that “This is NOT the Mount Hunger trailhead.” We drove a little further down the road and found the real trailhead.

It was 7:30 and we were the first at the parking lot. We took a look at the trail while Clover, my brother’s dog, ran around excitedly. We determined that the trail was well packed and frozen and that the previous night had only laid a dusting of snow on the trail. We decided to leave out snowshoes in the car and just go with microspikes.

Clover excited to lead the way

Once we got above 2000 feet the snow accumulation began to grow. It wasn’t long before the trees surrounding us were covered with snow and happy to drop their burden down the neck of our jackets as we passed. The climb was pretty relentless, ascending at a good rate with very few flat or downhill areas.

By the time we passed the junction for White Rock Mountain the snow was three inches deep and the trail was very steep. As we started to slide back down the trail (the snow depth being too much for our microspikes to grip), we wished we had brought our snowshoes. We pushed on with Clover running up and down the trail wondering what was taking us so long.

We finally pushed out of the treeline and got a glimpse of the the valley below us. The clouds were still fairly low, covering the peaks of Mansfield and Camels Hump, but it looked like Mount Hunger’s summit was in the clear. My brother had been concerned about Clover’s ability to climb the last bit of trail as it is was supposed to be fairly technical, but the terrain had been smoothed flat by wind-packed snow. We easily hiked on top of the encrusted snow with the exception of a few deceptive snow banks that swallowed us up to our waist.

We spent a bit of time on the summit, enjoying the views and having a snack. The clouds continued to clear and we eventually saw the summits of Mansfield and Camels Hump. 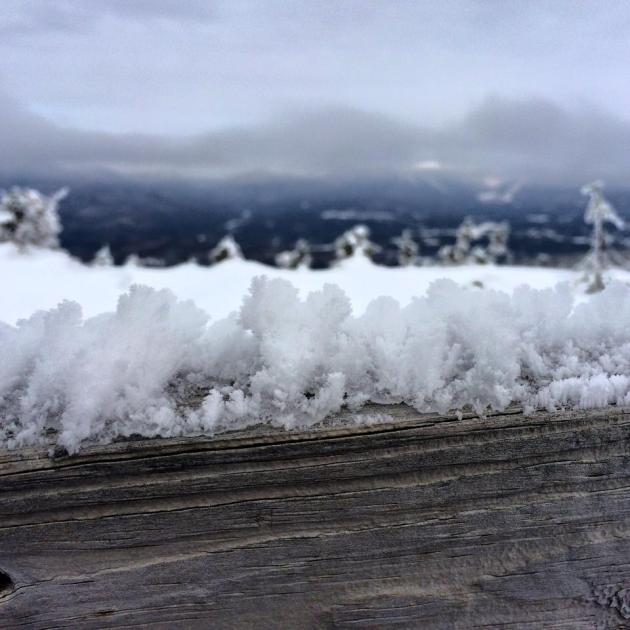 After enjoying the summit to ourselves we started down the mountain the same way we came. We quickly determined that it was going to be difficult to hike down the frozen snowpack covered with powder. That’s when my brother decided to slide down a section of trail on his butt. It was so much fun that we continued to glissade down the mountain whenever it was steep enough to do so. I had a new (to me) GoPro that my father sent so I could make videos for my blog and captured some of the glissading.

I counted 17 people as we hiked and glissaded down the mountain. Some cheered and laughed as we rocketed towards them down the trail or sat down a took off right after we safely passed them. We were lucky to have started early enough to miss these crowds and enjoy the pristine snowfall on our hike up.

We didn’t hike Killington like I had hoped, but we had a blast and now I have a reason to visit Vermont after Memorial Day (the Green Mountain Club closes trails during mud season, April 15 to May 25 this year). Best of all, we were back to our families before lunch and had time to head into Burlington and go to the farmer’s market.

We go sledding. We enjoy being young. We take what’s coming to us. That’s our way.
—M.T. Anderson 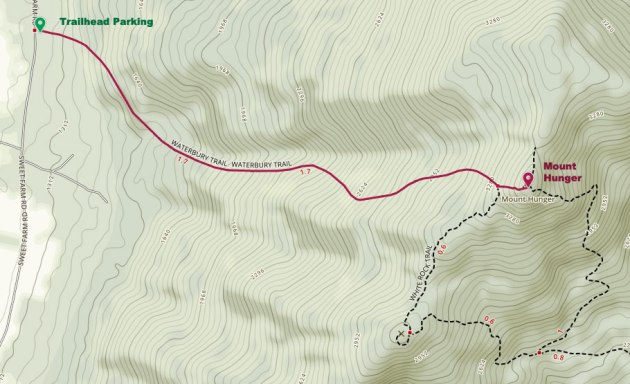