“A long time ago, a great battle ensued between the Spanish conquistadors and the Mayans.  At the moment of the Mayan Chief’s death, the sacred Quetzal fell silent and plummeted to the earth, covering the body of the Mayan Chief with his long, green plumes.  Rising at dawn, the bird was transformed…Its breast had soaked up the blood of the fallen soldier and become crimson, the shade of Mayan blood, as it has remained to this day.”

Adapted from Maslow’s Bird of Life, Bird of Death: A Naturalist’s Journey…

“We’ve heard a rumor…” the professors said last night. Supposedly they had heard that a (much-sought-after) Quetzal had been spotted making a nest on the land of one of the neighboring families and, for only $2 per person (!!!), the landowner would allow us to walk his land and seek out the Quetzal.  Though the adventure was optional, I woke early to make the trek and our bus took us a mile down the road to the neighbor’s land.  A homemade wooden sign declared we had arrived at our destination and we began to climb up the steep hill overlooking a wild avocado tree. 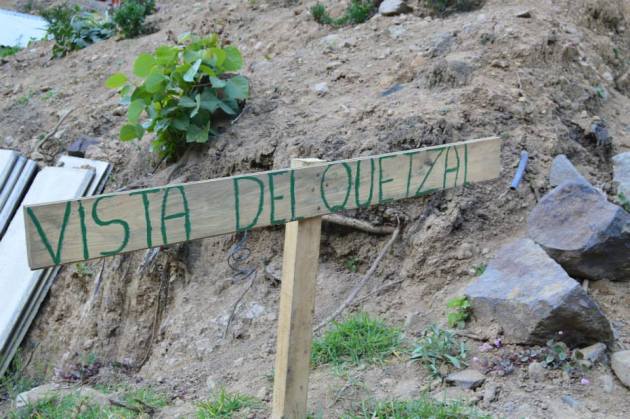 Those of us who had chosen to go on the adventure sat atop the hill and waited.  Patiently.  Quietly.  Eyes focused on the tree, looking for any sign of movement or color and listening intently for any sound.  One would not even dare to blink.

And then… A flurry of pointing arms…Waving hands to get attention…Finger-shhh-ing reminders of silence…Binoculars to our eyes and behold: the Resplendent Quetzal. 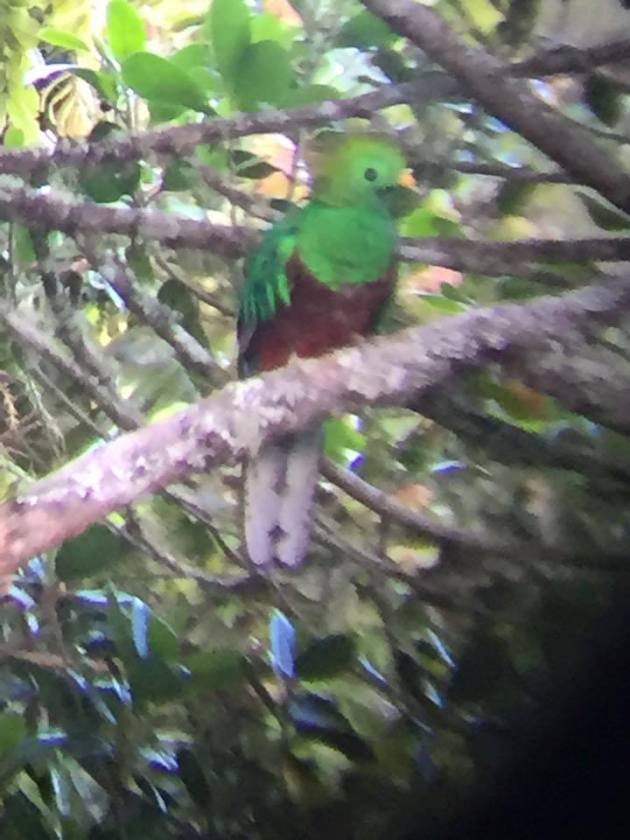 Or, more specifically, a pair of juvenile Quetzals whose long, glorious plumes had yet to grow but were; nonetheless, a sight to behold.  No photo, illustration, or words (perhaps a poet could find the appropriate words; however, I am not one) will come close to seeing the Quetzal in person and I feel incredibly lucky to have seen the bird and sat in his presence for a short amount of time.  To sit and wait patiently…knowing the early morning’s trek could have been be in vain…Then to be rewarded with a visit from this beautiful bird…This was a moment that was a highlight in the trip.

Some fun facts I’ve learned about the Quetzal:

One Last Very Thankful Note: How thankful I felt to the owner of the land for his willingness to allow a group of 20 students climb his nearby hill.  He was an incredibly generous host, sitting with us and waiting patiently while we waited.  We weren’t the only tourists he allowed on his land; several pairs of people had made their way up the hill that morning. Once we spotted the bird, he made sure everyone had a chance to see the bird through the telescope.  His generosity and openness is something I saw time and again in the people of Costa Rica.

After our visit with the Quetzal, we headed back to the lodge where we ate breakfast and prepared for our 10-mile hike down Cerro de la Muerte: “Mountain of Death” (or “Hill of Death”, depending on who one asks).

2 thoughts on “Waiting for the Quetzal”