It was barely 2015 and I was preparing for the first goal on my list of adventures for 2015: climbing my first New England 4000 Footer in the winter.

In the past I blogged about my three-season daypack, but this preparation took a bit more. I had to use my 65L Osprey Atmos pack (though it was no where near full) as I wanted to have enough room to carry any layers I would shed during the hike and have the space to strap on my snowshoes. Aside from the pack, the only other additional gear was the multitude of layers and traction.

I took a vacation day from work (it hurts to do so on the second day of the year, but any day spent hiking is worth it) and my friend from work John met me in Portland. We drove to Franconia Ridge State Park and met my brother at the Cannon Mountain Aerial Tramway parking lot.

Both John and my brother brought their dogs for the hike. My brother had a male Black Lab named Clover and John a female Rottweiler named Roxy. After a few minutes of sniffing, testing each other and running around they were ready to get into the back of John’s vehicle with minimal encouragement. We drove through the snow to Lafayette Campground and found very little parking available.

As we bundled up for the cold weather (the higher summit forecasts and mountain-forecast.com were calling for a wind chill around -20°) snow was quickly filling the inside of John’s truck, and the dogs were romping through the snow and once again testing each other. My brother discovered that his water bladder had emptied itself yet the inside of his pack was dry, a mystery. There was no water to be found at the closed campground so we started up the Lonesome Lake Trail as through the falling snow.

When we came to the first water crossing we stopped so that my brother could fill his his water bladder. The Lonesome Lake Trail is pretty steep down near the trailhead and we soon found ourselves overheating and needing to take off layers.

The following is how I had my clothing layered:

I took off my sweater, neck warmer and tactical hood and at times I even carried my hat and only wore my glove liners. I pretty much stayed this way for the rest of the hike except for when we summitted I put on the tactical hood. I ended up with too many layers, but that is much better than being cold. I will most likely repeat this set up for all of my winter hikes going forward.

Once we all cooled off a little we continued the trek up to Lonesome Lake. It wasn’t long before the trail flattened off and the lake came into view. When we reached its edge we saw another group crossing the ice to Lonesome Lake Hut. Without much hesitation we followed.

The wind and snow picked up out on the ice but it was totally worth it for the experience. I absolutely love Lonesome Lake and to stand in the middle of it and take in the wilderness and towering mountains was amazing. To our right we could make out the bumps of The Cannon Balls and the ridge leading up to Cannon Mountain.

Panorama of Lonesome Lake from the center of the lake

We crossed Lonesome Lake in short order, though I did lag behind trying to take it all in. When we got to the hut there was a large group getting ready to hike down to Lafayette Campground. One of the guy’s hands were bothering him because his hand warmers weren’t working and two others were in cotton layers and jeans or sweatpants. I’m still shocked that people go hiking and treat it like they’re walking down the street to CVS.

We stopped by the hut, said hello to the croo member who was outside shoveling and tried to see if we could get a view overlooking the lake. The steps from the lake to the hut were a solid sheet of ice and I took that opportunity to try out my new Kahtoola MICROspikes. I’ve been wanting to replace my STABILicers for some time and I finally picked up a pair of MICROspikes with a gift certificate from Christmas. They worked like a charm. I expected some slippage but could feel the teeth bite into the blue ice without a problem. Throughout the day, every single person we saw hiking was also wearing a pair of Kahtoola MICROspikes.

Except for my brother. Who had traction woes.

We followed the Around Lonesome Lake Trail around the western side of Lonesome Lake trying not to posthole off the side of the planks that elevate the trail above swamp in the other three seasons. We hit the upper part of the Lonesome Lake Trail, a section of trail I hadn’t experience before. It climbed through the forest from the lake to the col between the tallest Cannon Ball and Cannon Mountain.

Partway up we were tiring so we stopped for food. I discovered that my water bladder tube was frozen despite running it down the neck of my jacket. I recently read that using a Nalgene inside of an insulated sock is the way to go. I will try that with my next hike. My brother took the rest as a chance to change from my worn STABILicers to crampons in anticipation for the steep climb up to Cannon.

When we go to the top of the Lonesome Lake Trail it was 1:15pm and we decide not to do The Cannon Balls as it would result in some of our hike down Cannon Mountain happening after sunset. We started up the Kinsman Ridge Trail to the summit of Cannon Mountain.

I had climbed this section of the trail back in October and knew it would be a slog. John’s dog Roxy needed some help up the icy sections and my brother busted both of his crampons on the way up. First one broke and he put a STABILicer on the other foot and then the other crampon broke. We stopped so he could put on his alpine snowshoes, which survived the rest of the hike. On the plus side we had a few views to the west and south and it started to look like the weather would clear out. 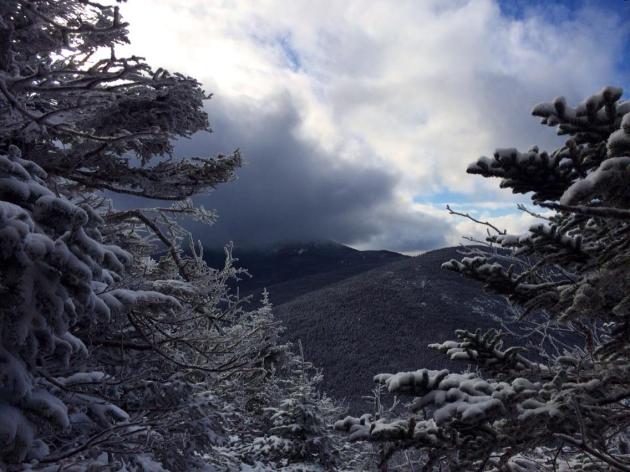 Clearing skies over The Cannon Balls

At the top of the ridge the trail flattened out and we made fast time to the junction with the Rim Trail. We dropped our packs and hustled up the observation tower. It was bitter cold and the wind was gusting hard but we relished the moment anyway. Though it had stopped snowing, the peak of the mountain was mostly cloudy. The view was still magnificent with glimpses of Franconia Notch below, all of the snow mantled trees and the entire surface of the observation tower coated in rime frost.

Back at the junction we stopped for another food break and discovered that frozen Clif Bars were hard to eat. We took our time hiking past the views at the ledges below the observation tower.

Before heading down the mountain we followed to the trail to the aerial tramway. We stopped and watch skiers go by and watch a tram make its way to the building. 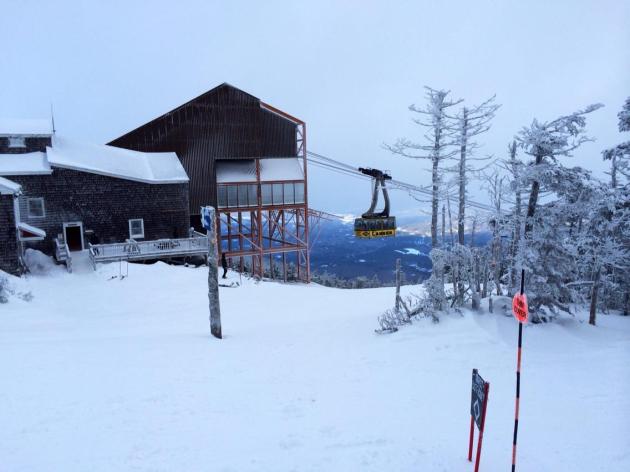 After the stop at the tram we took our hiking poles out for the two mile descent to my brother’s car. The Kinsman Ridge Trail between the summit and Cannon cliffs vista was an interesting, exposed hike with great views and a few short steep sections. It was definitely a section of trail that I look forward to hiking again in clearer weather.

We took the short spur trail to the Cannon cliff vista but with the hard-packed snow, ice and cloudy view it wasn’t worth getting too close to the edge. Soon after the Cannon cliffs the trail dropped into trees and we focused on descending. The views became more limited and the trail was a moderate decline. We were down to the car before sunset.

We drove to car at Lafayette Campground and then to the very crowded Woodstock Inn Station & Brewery. We enjoyed some beer samplers, hot food and our windburned faces. The restaurant was packed with people who had spent the day outdoors which created a cozy end to the day.

I’m pretty psyched to have completed my first 4000 Footer winter hike and look forward to the next. Things went pretty much perfect despite our clear forecast turning to snow and clouds the night before (welcome to the mountains). My water froze and my brother broke his crampons, but the dogs were safe and no one lost any digits to frostbite so I think it was a win.

Despite all I have seen and experienced, I still get the same simple thrill out of glimpsing a tiny patch of snow in a high mountain gully and feel the same urge to climb towards it.
—Edmund Hillary

Note:
I’m currently working through the backlog of my hiking posts to add a map of the hike. My hope is that the combination of the map and the stats will help you plan the hike for yourself. And of course, if you have any questions about the hike feel free to ask them in the comments. Wander on.