Mount Isolation is one of the more difficult 4000 Footers to reach, not because of its elevation but because it is far from access points and there are no real direct trails to it. Hence its name. From my research I found there were two common routes to Isolation, via Rocky Branch Trail or via Glen Boulder Trail and Davis Path. Rocky Branch was the easier route but was longer and didn’t afford views. Glen Boulder had exquisite views but reaching Isolation that way meant climbing the shoulder of Mount Washington twice. Since I decided to camp at Dolly Copp Campground the night before attempting Isolation, I thought I’d step it up a notch. I would take Boott Spur Trail (higher up on Mount Washington’s shoulder and further from Isolation) and Davis Path to Isolation, and return via Davis Path, Glen Boulder Trail and The Direttissima.

I got up at 4am in order to get to the trail by 5am. I had to start in the dark but it afforded plenty of daylight for the massive hike. I got to Pinkham Notch soon after 5am and headed into the section of the lodge that was open 24 hours. I signed into the log book but could not find a place to pay for parking. Knowing that I would be heading back to Pinkham Notch via The Direttissma, I had parked on the far southern end of the parking lot and decided to start the hike without paying. I would straighten things out when I got back if I had to.

I started up the Tuckerman Ravine Trail with my headlamp, almost tripping over the tent of someone camped in the trail. Soon, the Boott Spur Trail diverged left and started to climb through the forest and over boulders. As I got to the first vista the sky had lightened enough to put away my headlamp. I was stunned by the view of the Mount Washington’s massif. I got my first good glimpse of Huntington Ravine, the moon was just starting to set over the top of Boott Spur and morning mists shrouded Mount Washington Observatory from view. 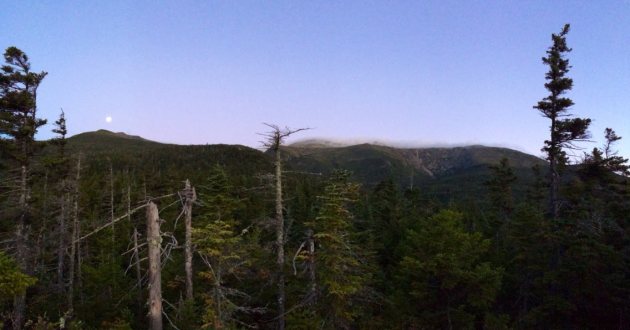 Moonset and morning mists on Washington

Further up the Boott Spur Trail I had a view of the Carters across the notch just as the sun rose above their peaks.

I came to a spur trail that lead to an amazing vista over both Tuckerman and Huntington Ravines. It was an incredible view of the ravines that I really hadn’t witnessed before. I had done most of my hiking of the Presidential Range from north to south, passing Mount Washington on the west. It had been cloudy when I climbed Wildcat D, and the Carters and Wildcat A hadn’t had a view of Washington. I stood for several minutes just staring at the baffling scenery.

As Boott Spur Trail climbed, it got on top of the ridge and opened up views to the south. I could see Glen Boulder perched on the next ridge and beyond it to the valley where North Conway sat. I came upon Split Rock and climbed through it even though the trail stayed to the right.

After Split Rock, the trail turned into a series of steep climbs and plateaus, creating many false summits but providing momentary breaks from the elevation gain. The view back down the trail was spectacular.

Looking back at Boott Spur Trail

At the top of the trail, with Davis Path’s cairns in sight, I rock-hopped off the trail to the top of Boott Spur. To the north I got a crazy view of Tuckerman’s Ravine, Mount Washington and Alpine Garden.

Mount Washington from the peak of Boott Spur

To the south I had another marvelous view: the Southern Presidentials marching down to Crawford Notch.

Southern Presidentials from the peak of Boott Spur

I made my way back to Boott Spur Trail and finished off the last hundred feet or so. I turned left down Davis Path and made good time descending toward the Dry River Wilderness. The trail was the typical, amazing Presidential alpine trail; a narrow rocky gash through surrounding scrub on top of an unprotected ridge. I came to the edge of the Dry River Wilderness and then dropped down into the forested mountains below.

Davis Path continued on through the forest, where there were many signs of the damage done by tropical storm Irene in August 2011. The trail was narrow and overgrown, showing that not many people travel the route, and in many places I had to duck under pine trees that were leaning over the path. When I came to the intersection with the west branch of the Isolation Trail there was a notice that it was closed from the damaged done by Irene. When I got to the intersection with the east branch of the Isolation Trail there was another warning that the Rocky Branch Trail south of Rocky Branch Shelter #2 was also closed.

It appears that at the end of September 2014 the Dry River Trail and the Isolation Trail have been reopened but are more rugged and harder to follow than previously. I have found no evidence that the Rocky Branch Trail has been reopened at the time of this writing.

A mile after the intersection with the east branch of the Isolation Trail, I came to the spur trail to the summit of Mount Isolation. It was a short climb to the summit and luckily I had an army soldier to point me in the right direction.

Pointing the way to Isolation

Isolation had a clear, ledge-topped summit with an open view of the southern Presidentials. Unfortunately, on that mid-week, early-September day the mountain did not live up to its name. There was a family camping in the trees just beyond the summit. I found Isolation not so isolated. The family had a young boy, 8 years of age I would guess, who followed me around and kept stating: “fine day for a hike, isn’t it?” Indeed it was. We talked for a few minutes before his mother called him back. It turned out that Isolation was his 47th New Hampshire 4000 Footer and his favorite. I didn’t get the chance to ask him which mountain was remaining. I would guess it was Owl’s Head, the other out-of-the-way summit.

As the family was packing up their gear, I decided to hit the trail ahead of them. I could have waited for them to leave and have the summit to myself, but it might have turned out to be a long wait. The hike back through the woods went by quickly and I soon found myself climbing up Mount Washington’s shoulder again. I toughed it out and took a break at the intersection with the Glen Boulder Trail.

The upper part of the Glen Boulder Trail would have been inspiring if not for being overshadowed by my hike up Boott Spur Trail that morning. It had some great views but dove into the trees much sooner than Boott Spur. As I headed down the trail I started to run into the day hikers who began their hikes at a normal times. I would start my hike in the dark any day just to beat the crowds to the trail.

I eventually got to Glen Boulder sitting precariously on the edge of the trail. Someone had comically wedged some three-inch-long twigs into the crack between the boulder and the ground, as if they were the only reason it was resting in place.

I remembered back to my first visit to Glen Boulder. It must have been back in 2000, the year that my wife and I got married. We took a trip up to the White mountains, drove up Pinkham Notch, climbed to Glen Boulder and back, and then looped around the Presidentials, making our way back to Route 302 and back to Maine. It had been the first time in recent memory that I had hiked above treeline. As I stood with my wife next to Glen Boulder and looked at the highway far below I realized that I loved hiking. It was a good decade before that feeling matured into the drive that possesses me to continuously hit the trail today, but on that day it was birthed.

The rest of the hike was a typical White Mountains descent: big, knee-busting steps down boulder-strewn trail. Once Route 16 was in ear-shot I found the junction with The Direttissma. The trail was a narrow one full of pointless ups and downs that followed the highway north for a mile until a parking lot on the south side of the New River, just below the Pinkham Notch parking. I crossed the bridge over to my car, wishing I had known The Direttissma had its own parking lot so I hadn’t worried about parking all day. With that thought I made my way through the buses of camp children and senior citizens to the Visitor Center where I bought a year pass to the White Mountains. I wouldn’t have to worry about parking for a while.

The goal of this hike was three fold: to push myself and see how big of a hike I could do solo; to get one of the more difficult 4000 Footers out of the way; and to get some solitude. All goals were achieved even though I found Isolation to be occupied. Boott Spur Trail ended up being one of my favorite day hikes. The weather was perfect, I didn’t see another soul on the trail and the vistas were phenomenal.

Isolation offered its own form of companionship
—Jhumpa Lahiri

One thought on “Hike: Mount Isolation”