My family and I were in northern Maine for a week this June so that my older son could attend summer camp at the Maine School of Science and Mathematics. We typically spend a week camping every year, and this year we decided to do it in conjunction with his summer camp. I heard only good things about Aroostook State Park and they were validated. It was a small cozy park (Maine’s first) situated between the shoulder of Quaggy Jo Mountain and the shore of Echo Lake. The primitive camp sites were nice and we got one with a large field on which my younger son could play. As a ranger explained to me, in its hayday the park was crowded with up to 1200 people making it difficult to find a place to sit on the lake shore. It was now quiet and overlooked, they way I like my vacations.

On the first full day at the park my younger son and I decided to hike Quaggy Jo. This was two days after we hiked Mount Katahdin, so we were pretty confident that the hike would be a breeze since the mountain barely broke the 1000′ mark. We started the hike up South Peak Trail, which was near our campsite. The trail shot up at a steep angle and I was soon huffing and puffing. My son jauntily lead the way and we broke out of the trees and had to climb up a rocky slide using our hands. 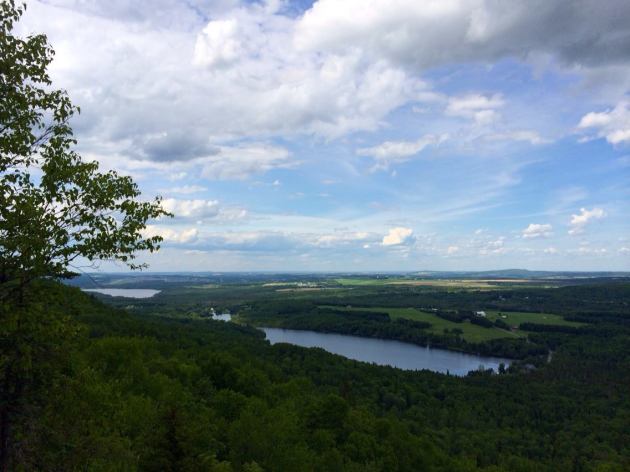 View from slide on Quaggy Jo

After the slide the trail leveled off and we reached South Peak which was crowned with a radio tower. Just beyond the peak, on the west side of the mountain was a small platform overlooking farmland below. We sat and talked for a short while and then headed back up to the summit to pick up the trail to the north peak.

Ridge Trail dipped into a shallow col and then slowly climbed up to toward North Peak. On the way to the peak we came to a leanto and picnic table with a great view to the east.  We stopped for a snack and looked out over the scenery. We investigated the leanto and I caught a good photo of my son sitting on its platform. 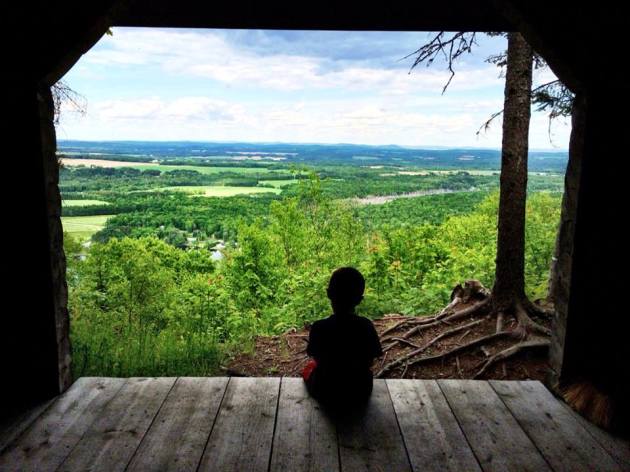 Just to the southeast we could see the ridge line of Mars Hill with all of its wind turbines; an impressive sight. 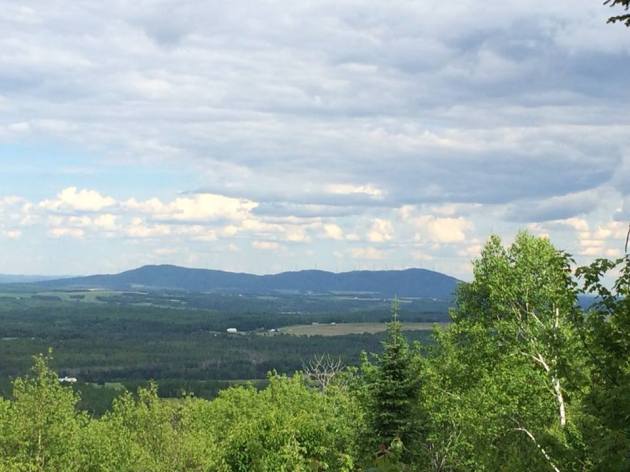 We left the leanto and shortly came to North Peak. We sat for a while as I finally had a good signal on my cellphone, I hadn’t had a reliable signal for three days prior.

We descended from North Peak on the steep North Peak Trail. At the foot of mountain we followed the Mountain Trail back toward the campsites and exited the forest near the small playground where my son played for a while. My son had recovered quickly from the hike of Katahdin and thought the hike was easy. I was still sore but enjoyed getting into the mountains again.

I decided that I would get up early the next morning and hike North Peak of Quaggy Jo to watch sunrise. I got up at 4 am and hit the trail by 4:30, making it to the summit with plenty of time to watch the sky turn from orange to pink to purple before fading to its normal light blue.

I expected an easily hike compared to Baxter Peak, instead we met a short but challenging hike with rewarding views of the farmland around Presque Isle and Mars Hill. I didn’t realize it at the time, but Mars Hill was the first place in the United States to see the morning sunlight (during the summer months, it’s West Quoddy Head the other half of the year), so Quaggy Jo must have been a short second.

Nothing is more beautiful than the loveliness of the woods before sunrise.
—George Washington Carver 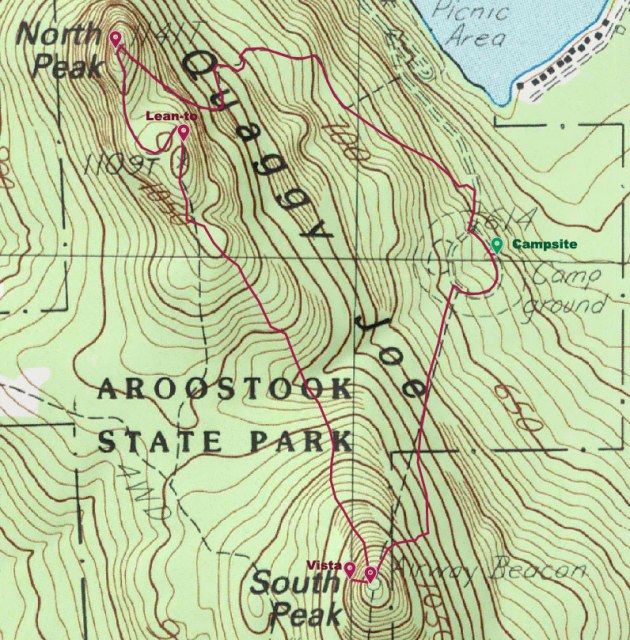 One thought on “Hike: Quaggy Jo”