Backyard Adventures are small adventures that I set upon to soothe my wanderlust when I cannot afford (with time or money) to take on larger adventures. Some will be done with my sons (under the guise of “just playing with the boys”), and some will just be flat out crazy to the normal (read sheltered) human and I’ll have no real excuse for my behavior except that I wanted to see what it was like. This was one of the latter.

It’s the dead of winter and you don’t have the gear for camping overnight, what do you do? Me, I camp out overnight anyway.

I have a L.L. Bean Microlight FS tent, an EMS Mountain Light 20° sleeping bag and a Big Agnes Air Core sleeping pad. Great, 3-season, light gear. But, I have dreams of hiking my first winter 4000 footer. Unfortunately, since I live on an island off the coast of Portland, Maine, it requires an overnight camp to have enough daylight to hike a 4000 footer. My goal this winter is to find the perfect weekend where it’s not snowing on a Friday or Saturday night so I can drive up to the White Mountains, where the temperature doesn’t drop below 20°F at night (okay, I could take low teens) and the weather on the following day is below freezing but sunny and with as little wind as possible.

In order to prepare for the camping-overnight-bit of my dream weekend, I decided to try camping out overnight on the island in the middle of January.  I didn’t want to find myself out in the middle of the White Mountains in some of the “worst weather in the world” without knowing my gear’s capabilities. When a weekend came around where I wasn’t doing anything and the weather was looking optimal for my test scenario (low wind, temperature in the 20s) I decided to take my gear for a test run.

Yes, my wife told me I was nuts as well. 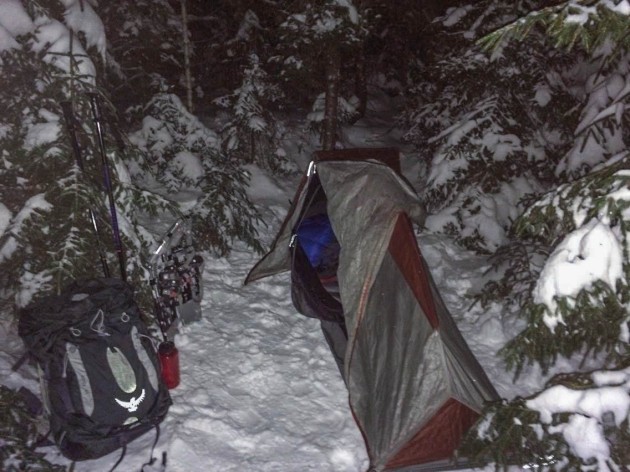 Settled down for a cozy night

I packed up my gear and headed out into the forest near my house. I brought my headlamp with me but found it wonderous to wander the forest by moonlight. It transformed the woods that I grew up exploring into an unknown landscape. I made my way generally toward the middle of the woods, hoping to find a location that was far enough from houses and streets as to not hear any cars or see any lights.

I found a spot sheltered by a small copse of pine trees but with a clear view of the stars overhead. I stamped out a flat area with my snowshoes and set up my tent. I realized I didn’t know how to stake out my tent in snow, which I needed to do in order to properly utilize the fly, so I hoped that the wind wouldn’t pick up overnight. I fired up my new Jetboil Flash, cooked some dinner and cracked open a Maine Beer Co. Lunch. I spent a little while enjoying some hot food, great beer and staring at the stars, but it was time to get to business. The reason I was here was to test out my gear, so I hit the sack.

I spent the night trying to keep warm. The weak point in my protection from the cold was my air pad. Any part of my body touching the pad slowly had the heat sapped out of it. After a while I would wake up and need to turn over to warm that side of my body. My feet were also cold, but not cold enough to interrupt my sleep. Several times I considered packing up and snowshoeing back home, but I did not relish crawling out of my warm(ish) sleeping bag into the frigid winter night.

After enough time had passed that I deemed it not insane to get up (4:30am), I quickly made my way out of my sleeping bag and into my clothes. My boots were ice-cold and my toes were soon numb. I fired up my Jetboil to make some coffee. I was lucky that I had the Jetboil running because my tent poles turned my fingers instantly into ice and I was able to warm them over the flame. I found that many of the tent pole sections were frozen together and I had hold them between my fingers until my body heat thawed them. Shortly I had my camp broken down and I enjoyed my coffee by the flame of the Jetboil.

I headed home in the early morning darkness, following the same meandering route I took into the forest. By the time I made it home the eastern sky had begun to lighten, so I dropped my pack and made my way to the south shore of the island. I ended my backyard adventure snapping some shots of ice and sunrise. 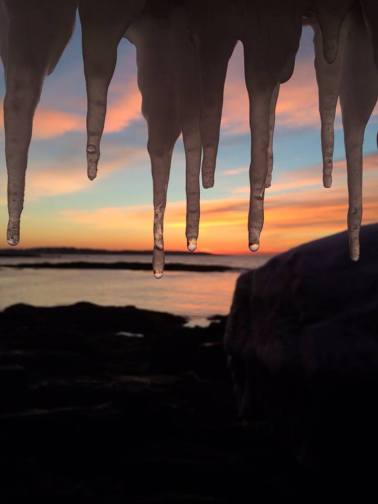 My takeaway from this experience was that I didn’t have the gear for single digit temperatures, but I think I could have made it through a night in the high teens and twenties. I’m pretty sure that wind would make even the twenties hard to bear as there was space between the ground and the bottom of the fly. Possibly I could have figured out how to stake out or tie down my fly and then pile up snow around it to prevent wind from entering the tent.

Sounds like something to test out on another cold and windy night this winter.

A few tips and realizations I’ve discovered since that night:

A career is wonderful, but you can’t curl up with it on a cold night.
—Marilyn Monroe